19 most beautiful fountains in Rome

The Eternal City is often called the "city of fountains". And it sounds like true! Fountains of Rome were luxurious gifts of the Popes, and they continued the history of ancient aqueducts. The ancient Romans always knew the fact that water has the power of life. But the Middle Ages and the Renaissance discovered that water can become a force of beauty.

Stone, marble, bronze... Water cascades, breaking above the heads of ancient heroes and legendary characters, create fantastic pictures. And only for this it is already worth coming to Rome. It is hard to say how many fountains are there. But a visit to any of them, especially in the night, will add one more bright and fascinating impression to the life of a traveler in Italy.

The main fountain of Rome and Italy is the Trevi Fountain on Piazza di Trevi, which is located next to Palazzo Poli. Trevi became one of the gems of Rome in the middle of the 18th century. This is the meeting place for lovers and the symbol of many romantic movies: "Madly in Love", "La Dolce Vita", and "Roman Holiday" were created here. 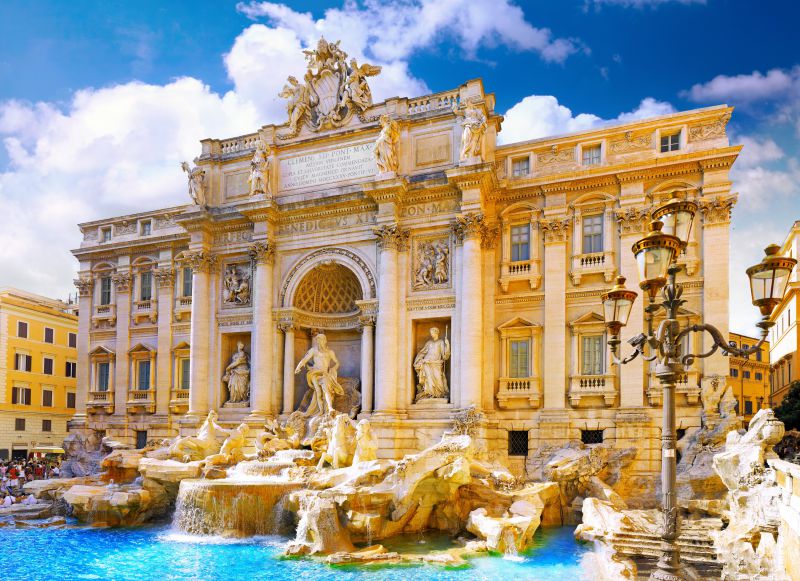 Hotels near the Trevi Fountain:

This fountain is also called Il Fontanone, or "The Big Fountain". It is located on the Gianicolo hill. The fountain was built in 1610–1612 on the place, where the restoration of the Acqua Paola aqueduct (named after the Roman Pope Paul V) has been already completed. Quattro Fontane is a complex of four fountains of the late Renaissance (late 16th century). Here, at the crossroads of the Four Fountains and Quirinale streets, the Arno River, the Tiber River, the goddess Diana and the goddess Juno are symbolically represented. The idea of ​​the fountains belonged to Pope Sixtus V. 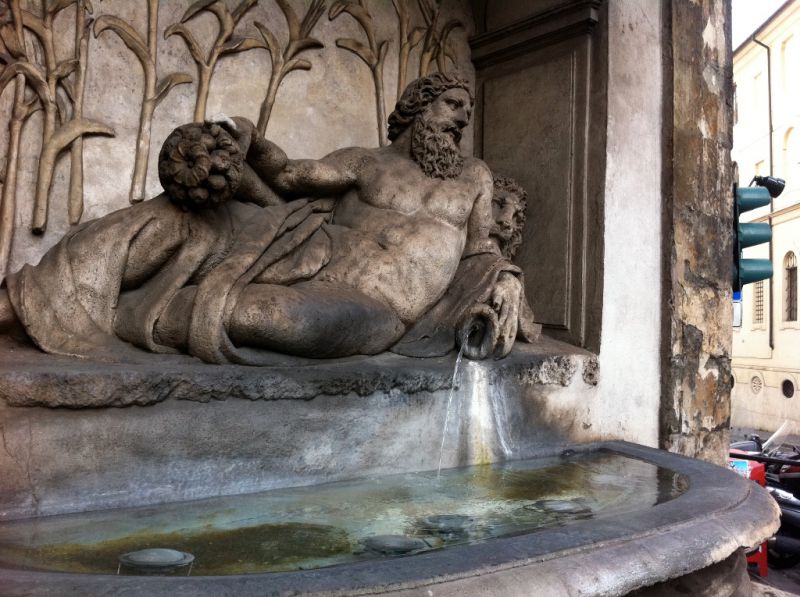 Fountain of the Naiads

It is also called the Fountain of the Nymphs. The fountain is situated on the impressive Republic square. The history of the elegant work of architectural art dates back to 1870, at the time of Pope Pius IX. A little later the fountain was moved to a modern place on the Republic Square. Four bronze nymphs – symbolic water elements of the work of Mario Rutelli – were built here in 1901. 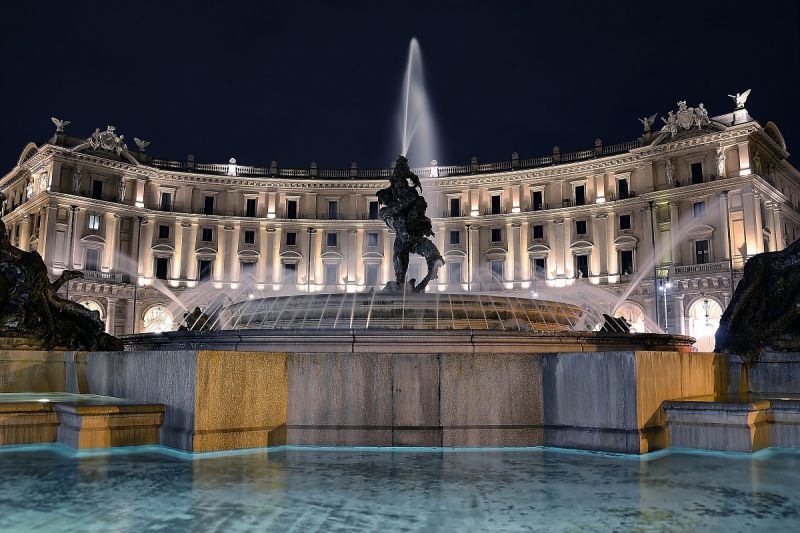 Fountain of the Four Rivers is the main decoration of Piazza Navona. It was created by the famous Italian architect Bernini by order of the Pope Innocent X. The fountain statues are of the river gods that represent the main rivers of the four parts of the world. These are the Nile, the Ganges, the Danube and the La Plata. 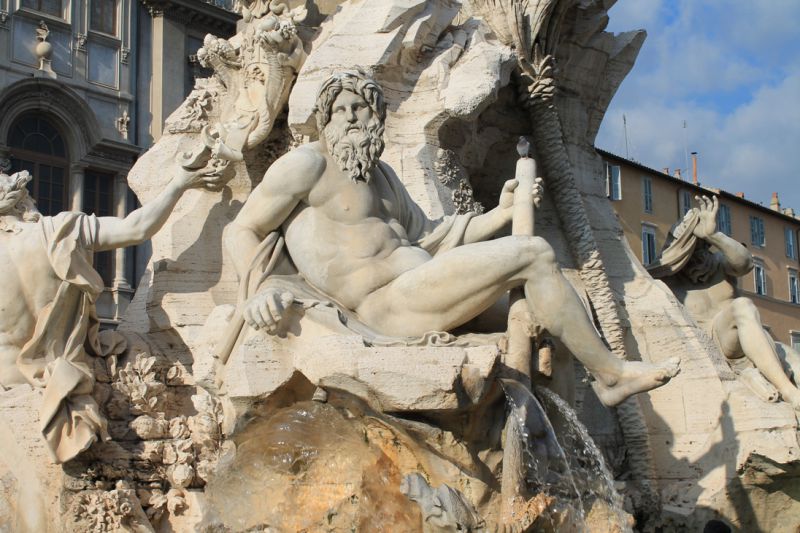 Neptune Fountain is located in the northern part of Piazza Navona. In the 16th century it was a simple fountain, and 300 years later it became a gem of architecture. All because Antonio della Bitta created the sculptures of Neptune, the octopus and the Nereids. 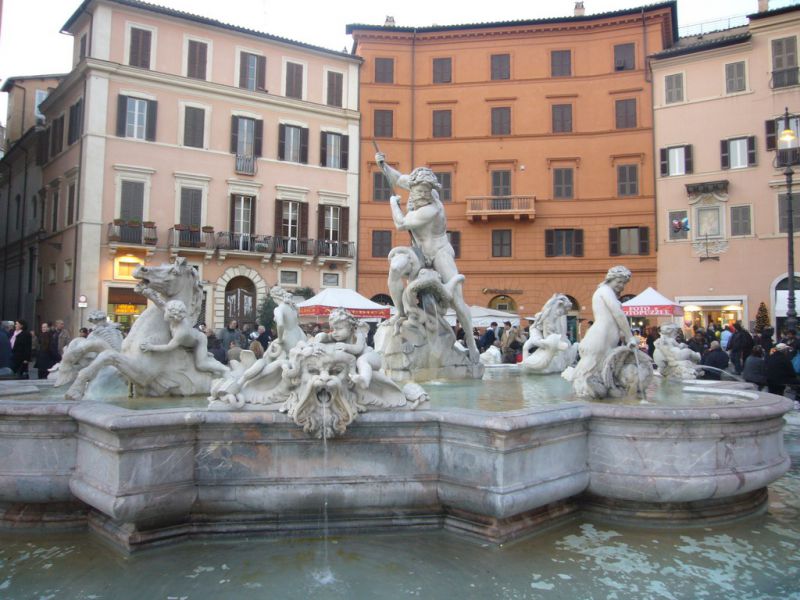 The unusual Moor Fountain is situated in the southern part of Piazza Navona. In the 16th century it was adorned only with triton sculptures, but later, thanks to Bernini's imagination, a Moor fighting with a dolphin appeared here. 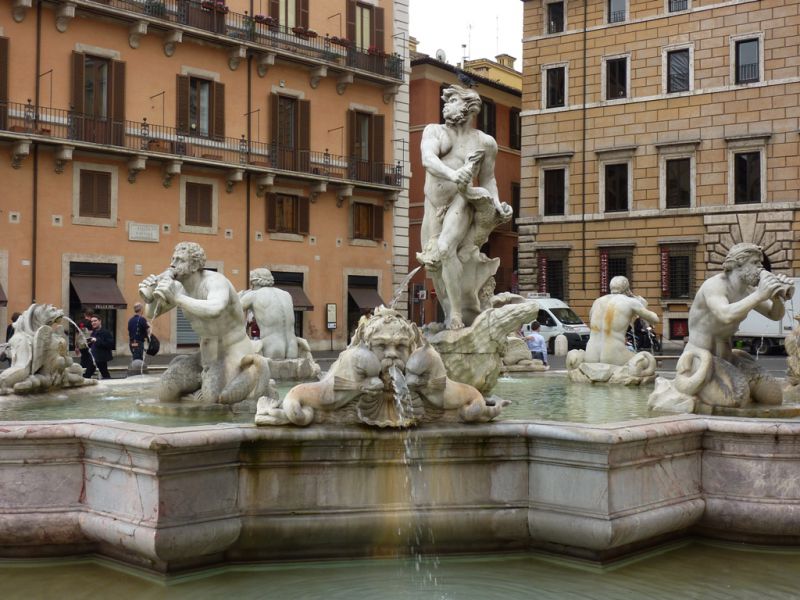 The original Bee Fountain is the refined mini-masterpiece of Lorenzo Bernini, the "father of the Baroque". It was built on Piazza Barberini, where the guest house La Dolce Vita Barberini is located. The fountain was built during the reign of Pope Urban V. And the local guide will tell you the legendary story of how the Pope himself died with the end of the fountain construction. 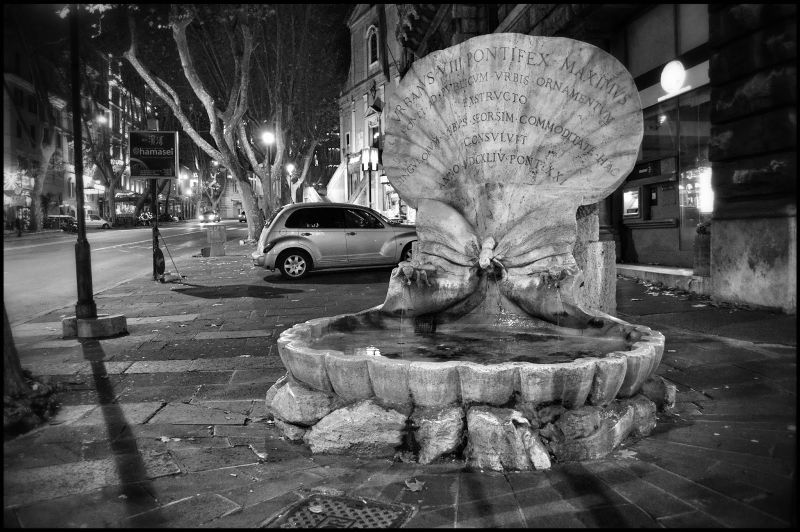 The Triton Fountain is another famous fountain situated on the Piazza Barberini. The construction of this fountain was the idea of ​​Pope Urban VIII (born Maffeo Barberini), that was embodied in 1642 by Lorenzo Bernini. Here, statues of dolphins and the mythological god Triton – the son of Poseidon (another Greek god) are combined. 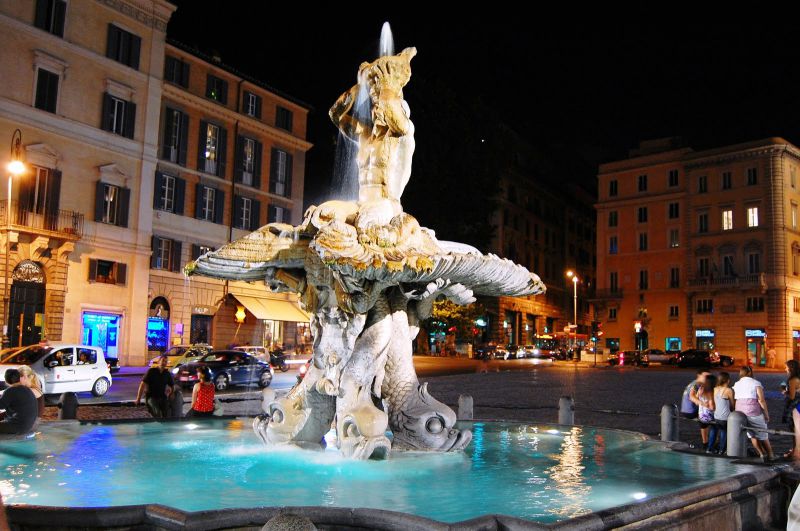 Another place that always attracts travelers to the Eternal City is the Fountain of Turtles. It adorns the Square of Mattei in Rome (near the Kame Hall complex). This fountain, like 17 others, was built by order of Pope Gregory XIII at the end of the 16th century to supply Romans with water. Bronze turtles "arrived" later, already in the middle of the 17th century. 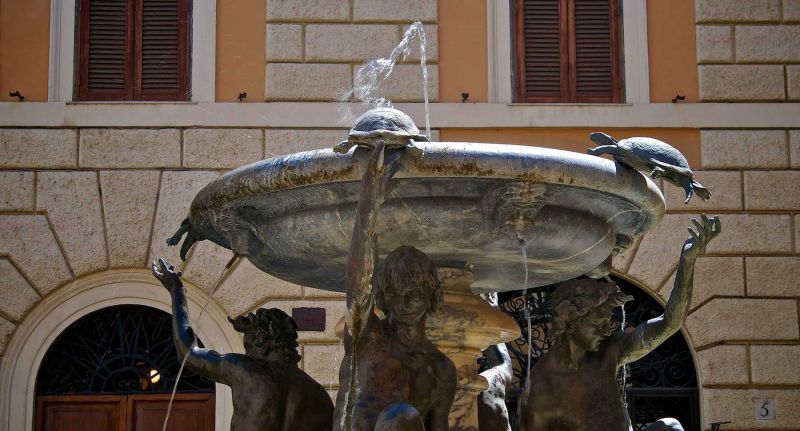 This is one of the not very famous fountains of Rome, which is still worth a visit, especially if you are on your way to the Pantheon. This fountain is an ancient granite structure of the Roman Empire, part of Nero's term. When in 1987, the anniversary of the Constitution of Italy was celebrated, the fountain was installed next to the Senate.

Fountain of Dioscuri is situated on Quirinal Square and along with the Quirinal Palace creates an interesting architectural ensemble. Figures of the Dioscuri, Pollux and Castor, were transferred to the square from the term of Constantine. The fountain was created in 1588 by the will of Pope Sixtus V, and 230 years later – it was reconstructed by Pius VII. 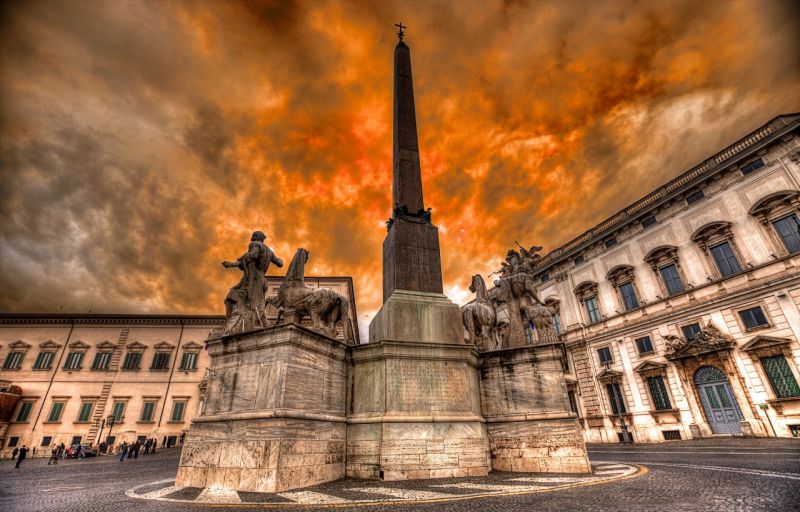 The Roman square of Piazza del Popolo is decorated with several fountains. In the center, around the obelisk are four bowls with marble lions that are the work of Giacomo Porta. Another fountain is the sculptural of Neptune and the tritons. On the other side, at the feet of the goddess of Rome, the she-wolf is feeding Romulus and Remus. 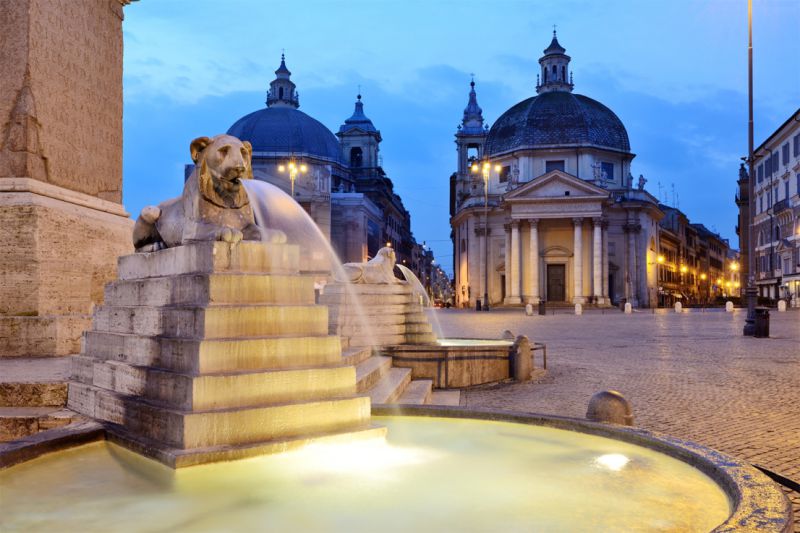 Hotels and apartments near the Piazza del Popolo:

Unfortunately, the ancient fountain of Meta Sudans is practically lost – it is mostly the memory of a remarkable ancient structure. It was the same age as the Colosseum (originated in the 1st century AD). The fountain had a conical shape and somehow resembled a round vase. It was located opposite the Arch of Triumph of Constantine. The remains of Meta Sudans can only be seen on historical photos of the 30s of the 20th century... 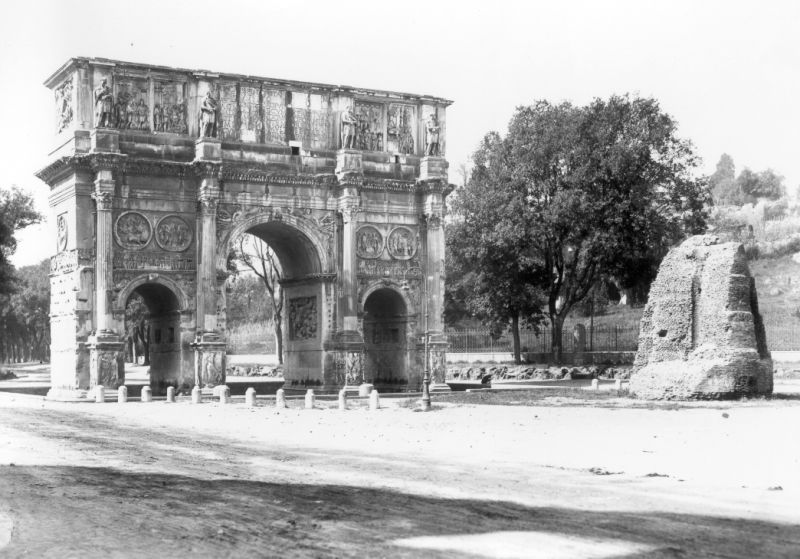 Barcaccia, or "Boat", is supplied with water from the famous Aqua Virgo aqueduct. It is a baroque fountain of the early 17th century, which is easy to find on the Plaza of Spain, near the Spanish Steps. Once the area was flooded, and the boat ran aground. In memory of this, Pope Urban VIII wished to create a fountain. The desire was embodied by Pietro Bernini. If you want to stay nearby, there are hotels Spagna 29 and Piazza di Spagna Suites. 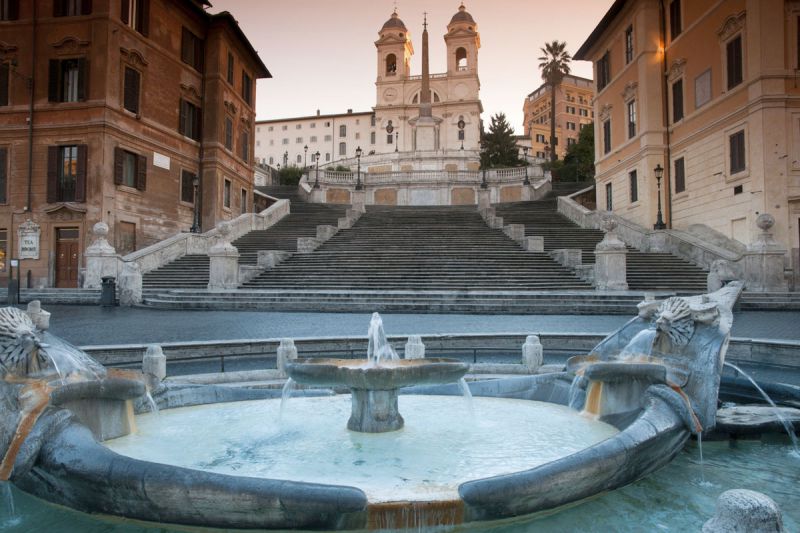 The history of this octagonal fountain (its symbolic name is sometimes translated as "oily spring water") is connected with the Church of Santa Maria in Trastevere, next to which it is located. Travelers retell the legend, according to which at the time of Christ's birth, the precious fragrant oil sprang from the source of the world on this place, which marked the beginning of our era. The first church here was built in the 3rd century, and in 1692 a fountain was created. Sea shells (symbols of chastity) decorate it. 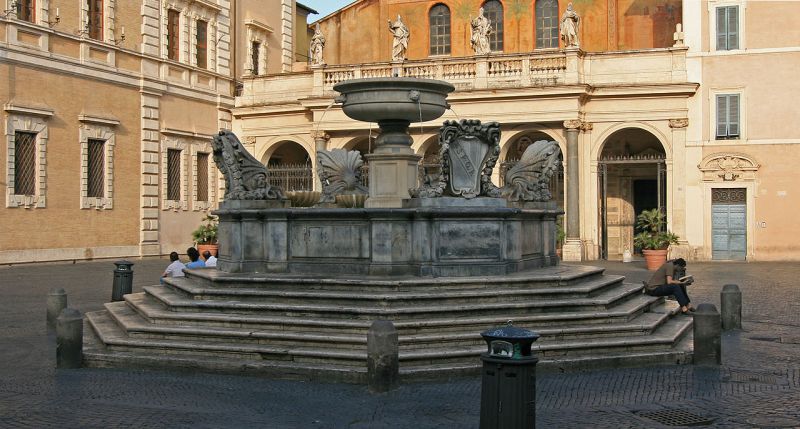 Hotels and apartments near the Church of Santa Maria in Trastevere:

Piazza della Rotonda is the square in front of the Pantheon, where the fountain of the same name is located Fontana del Pantheon. It was built in 1575 by Giacomo della Porta. The idea of ​​reconstruction (1711) belonged to Clement XI, who immortalized his name in stone. 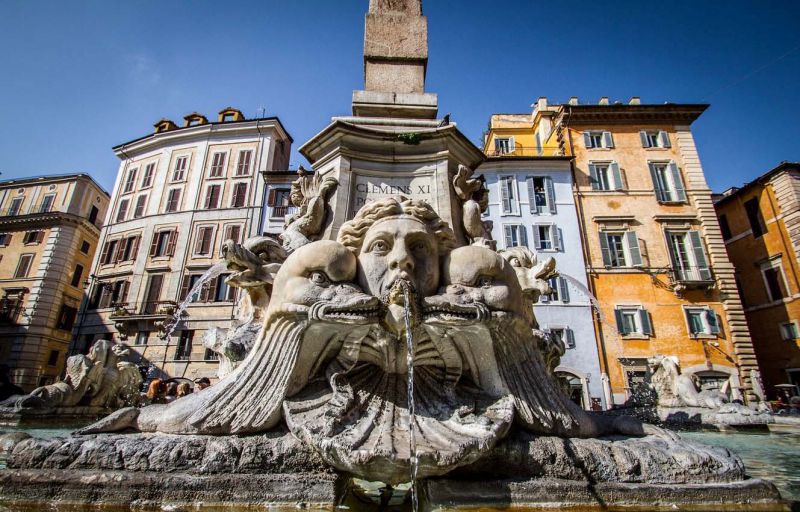 Fontana dell'Acqua Felice, or Fontana del Mose (Fountain of Moses) are the names of this beautiful buildings. The fountain is situated in the Quirinal area, where the Aqua Alessandrina aqueduct once ended. It was restored by Pope Sixtus V (Felice Peretti), and over time both the aqueduct and the new fountain were given his name. Aqua Felice is adorned with the biblical heroes of the Old Testament. The central one is Moses. 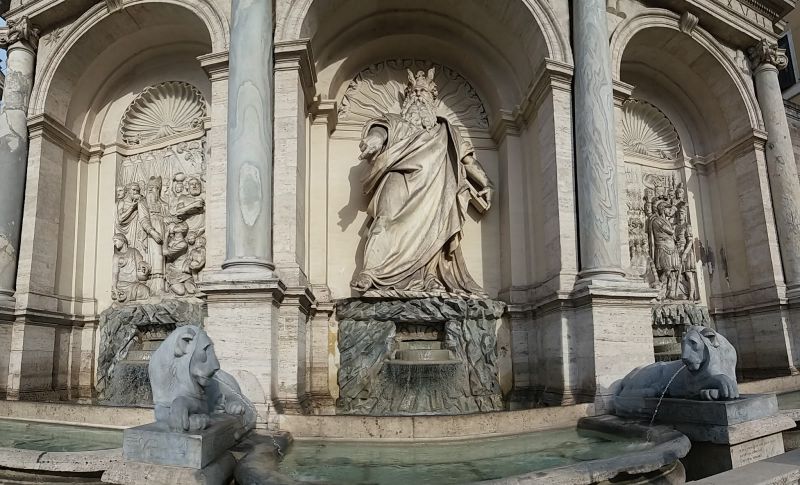 Fountain of the Frogs

In the early 20th century, Gino Coppede built a residential area in a modern style "Liberty" in Rome. It is a different and unusual, non-tourist corner of the Eternal City. The funny Fountain of Frogs is in the center of the architectural ensemble, in the present Coppede square. 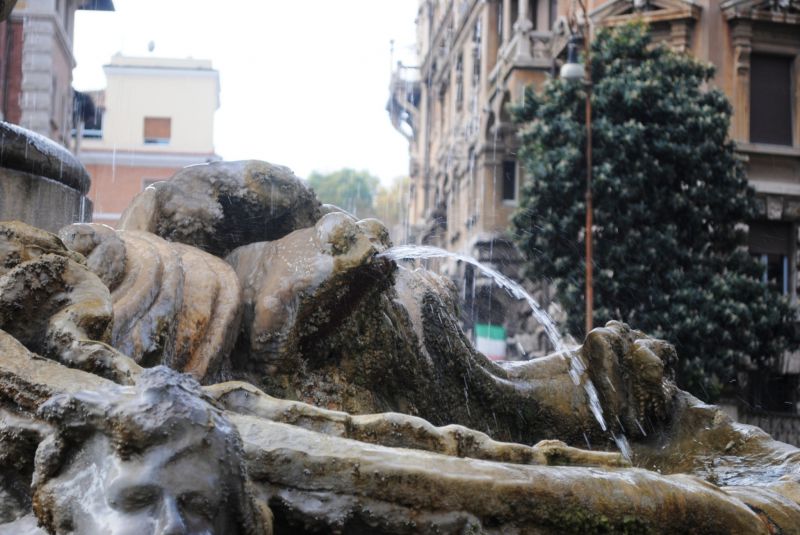 Remember only one thing: the fountains of Rome are not designed to drink water from them. There are special small drinking fountains on the streets of the city. And, of course, you should not unnerve the Roman police and climb into historical fountains to swim :)