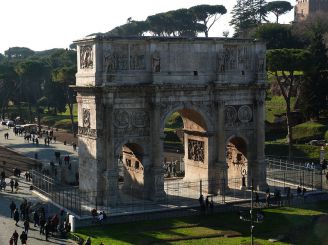 The Arch of Constantine in Rome is located in the historic centre of the city, not far from the Colosseum. In 312, Constantine the Great won over Marcus Aurelius Maxentius, and the monument was promptly commissioned to mark the victory. The construction, which has three archways, is 21 metres high, almost 26 metres wide and more than 7 metres deep. It is the latest Roman triumphal arch among those extant and the only one dedicated to the victory in the civil war.

The beginning of the 4th century in the Roman Empire was plagued by internecine wars, uprisings and frequent changes of rulers. The Arch, which had to epitomize the deeds of the future great ruler and the first Christian emperor of Rome, was built very hastily in two years.

To erect Arco di Costantino, different elements and bas-reliefs were taken from other Roman constructions. This happened for a number of reasons.

The official opening of the arch was held on July 25, 315. Arco di Costantino was built on Via Triumphalis. It was the road that Constantine took to enter the city in triumph. Today, the arch is located between the Colosseum and the Roman hill Palatine.

Between 306 and 308, the Roman Empire was ruled by 5 independent rulers who fought each other, condemning the state to decline. The son of the Emperor Maximian Maxentius forced his father to renounce and set off to his son-in-law, Constantine, who at the time was fighting the Franks. The rights to the Roman throne were disputed between Maxentius and Flavius Severus, who had the title of Caesar of the West. After the death of the Severus in 307, his title was succeeded by Licinius, who ruled together with Maximinus Daza according to the appointment of Augustus Galerius.

The troubled times of usurpation and tyranny during the reign of Maxentius led to the disobedience and rebellion of people and the proclamation of Constantine as an augustus. In the Battle of the Milvian Bridge near Rome, Constantine put the troops of Maxentius to flight, and the latter rushed to the Tiber and drowned. On October 28, 312, Constantine solemnly entered Rome with his legions.

Structure of the arch

The attic of the triumphal arch is made of bricks and is decorated with eight bas-reliefs taken from the monument dated back to Emperor Marcus Aurelius's reign. The four sides of the construction depict the Emperor's return from the war, capture of the Germanic leader, sacrifice of animals, as well as handing out money to the Romans by the heir of Marcus Aurelius Commodus. Corinthian columns of white and yellow marble from Numidia are crowned with bas-reliefs featuring the goddess of victory, captured barbarians, and Roman soldiers.

Between the columns are two-meter medallions imaging the events of Emperor Hadrian's reign and scenes of hunting. Although, Hadrian's head was replaced by the head of Constantine. On the side walls of the attic one can see battles with the Dacians. The columns are decorated with their images taken from the Emperor Trajan's era monuments.

The Triumphal Arch of Constantine in Rome is located on Via di San Gregorio. The attraction is accessible by metro (Colosseo station). The arch is located next to the Colosseum, the ruins of the Roman Forum and the temple of Venus which are a minute walk from the metro.