One of the symbolic monuments of Rome – the Pantheon – is located on Piazza della Rotonda. The monument was built in 126 by Emperor Adrian.

History of the Pantheon

Earlier, on the place where the Pantheon is situated nowadays, was a temple built in the year of 27 BC by commander Marcus Vipsanius Agrippa, as the inscription on the pediment of the building says. The architect Apollodorus of Damascus supervised construction work.

In the 7th century, the pagan Pantheon became Christian. It was donated by the Byzantine Emperor Nicephorus II Phocas to Pope Boniface IV. In 609, Pope issued a decree and renamed the Pantheon in the Church of Our Lady of Martyrs, which allowed monument to survive till the present day, while many ancient monuments were destroyed.

In the 14–15 centuries, the Roman Pantheon was used as a defensive structure, and only during the Renaissance it was rebuilt. Raphael Santi led the restoration works at the temple, where he was buried in 1520. Pantheon served as the burial place of the royal dynasty.

In the 17th century, an Italian architect Giovanni Bernini created what the next two centuries the locals called "donkey ears of Bernini" – he overbuilt two small bell towers. Later, they were removed. 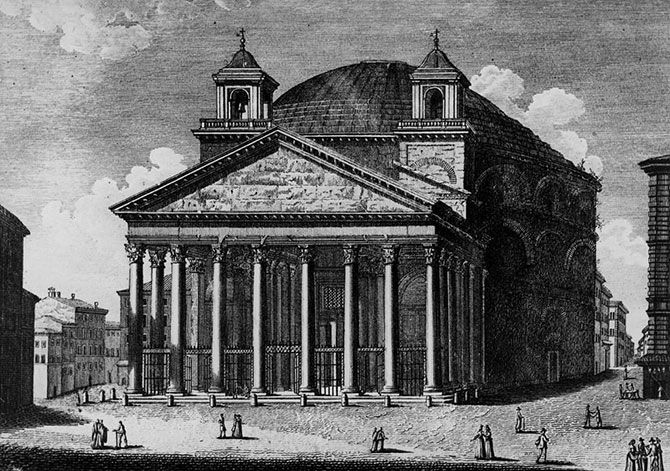 Today the Pantheon in Rome is a symbol and landmark of the city, which attracts many tourists. During holidays worships are held there.

The inner part of the Temple of the Gods

Inside, the temple is decorated with colored marble. Visitors enter the Pantheon through the ancient bronze gates, 7 m high. The transformation of the ancient temple into the Christian one allowed to keep many elements of the architecture in its original form.

Further, through the lobby, you will be in a massive portico with columns. Their base is made of red granite brought from Egypt, and the capitals and bases – from Greek marble. The walls are divided by niches, where the paintings of famous artists are placed nowadays.

While the outside of the Pantheon impresses with its strength and power, inside the temple you will feel calmness and a sense of the universal acceptance of the outside world. The dimensions of the temple are designed so that its height corresponds to the diameter of the rotunda, and if you continue the dome to the ground – it turns to a globe. Ancient architects believed, the globe is a symbol of harmony of the universe.

The nearest metro station is Largo di Torre Argentina. You can get from Spain Square to the street of Via del Corso on foot.