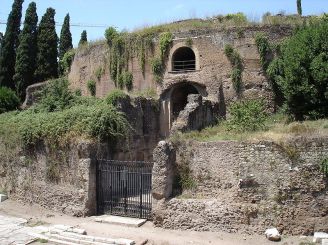 The Mausoleum of Augustus in Rome – Roman monument in the northern part of the Campus Martius between the Flaminia and the Tiber. The monument was erected by the emperor Octavian Augustus in the form of a generic family tomb Julio-Claudian.

The history of the Mausoleum of Augustus

The construction of the mausoleum began in the 20s BC. According to legend, the emperor Octavian, seeing the mausoleum of Alexander the Great, decided to build his own behalf pantheon.

Mausoleum of August is in the form of the Etruscan burial mound, tumulus, which consists of:

The height of the structure was more than 40 m. Shrine area was surrounded with a colonnade. The entrance was decorated with two monuments, which marks the victory over Cleopatra and Mark Antony. Today, one of them is set to the Piazza del Quirinale, and the other – on the Piazza Esquilino.

Next to the monuments were placed bronze plates with a detailed description of acts of Octavian Augustus. From the entrance the long gallery led into a round burial chamber with three square niches in which the urns were.

The first in mausoleum was buried captain Marcus Marcellus. There were the remains of the Emperor's sister Octavia, Augustus and his wife Libya. In the mausoleum were buried emperors, generals and statesmen of the family of Octavian. The latter is established urn with the ashes of Nerva Caesar Augustus in 98 year.

After the capture of Rome by the Visigoths in the early V century, the mausoleum was looted and urns with ash were destroyed. The mausoleum, along with Rome experienced the dark ages of neglect and decay. About the construction in the XII century, during the strife, remembered Colonna family, and used it as a defensive structure.

To the beginning of the XIX century remains of the mausoleum were exploited as free theater stage for stray actors. Only in the early XX century, during the reconstruction of the Champs de Mars and the excavations in its vicinity, August mausoleum was cleared of groundwater deposits. Since 1936, its reconstruction was begun.

By 2000th anniversary of the death of Augustus (14 AD), scientists and conservators had planned to restore the mausoleum of Augustus in Italy. Due to delays in funding, work was suspended.

In 2016, as an experiment restorers decided to open the access to places of interest for visitors. The result was amazing - about five thousand Romans and visitors came to the capital, in spite of the rainy weather, to see the legendary monument of the Roman era, showing reverence to the Emperor Augustus.

Mausoleum of Augustus in Rome, located on Augustus Square. Acces closed. The construction can be viewed only from the outside. The easiest way to reach the area is by metro to Spagna station branch A where in a few minutes you can reach on foot to the mausoleum.