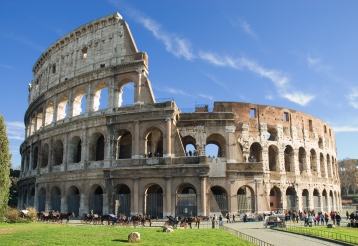 The Flavian Amphitheatre, the Colosseum or Coliseum in Rome is one of the greatest historical and architectural monuments of the Roman Empire, preserved until our time. The Colosseum is located in the lowlands between the three Roman hills: Esquilino, Palatine and Celio. The amphitheatre was built in the first century by the Roman emperors of the Flavian dynasty. In this way, gladiatorial fights were popularized. The opening of the amphitheatre was accompanied by games and battles, in which for a hundred days (according to various sources) from 5 to 9 thousand wild animals were killed.

Colosseum history and its architecture

The Colosseum had four main entrances. Besides, 76 other entrances, located around the perimeter, provided quick access to places in the amphitheatre. Places for the public were in three tiers. According to modern estimates, the Colosseum could accommodate about 50,000 people. Places strictly corresponded to social stratum, forming sections for the emperor and his entourage, nobles, plebeians. There were places for women and slaves in the gallery.

The amphitheatre is made in the form of an ellipse, the length of which is 524 m, the length of the arena is almost 86 m, the width is almost 54 m, the height of the walls reaches 50 meters. The Colosseum is built of large blocks of travertine, interconnected by iron clamps. Interior decoration is made of bricks and tufa.

In 217, when Emperor Macrinus ruled, the Colosseum was damaged by fire, but it was restored under Emperor Alexander Severus. In 248, the Millennium of the existence of Rome was celebrated in the Colosseum.

At the beginning of the 5th century, Emperor Honorius prohibited the conduct of gladiatorial fights, as this was contrary to Christianity. Since that time, the decline of the amphitheatre began. The invasion of the barbarians, and especially the earthquake in 1349, badly affected the Colosseum's shape. Its southern wall collapsed during the earthquake. Over time, the Colosseum lost more than half of its stone structure, also because it turned into a source of building materials. Thus, in the 16th century, Pope Paul III used the Colosseum material for the construction of the Palazzo Farnese. There were many such examples. The attitude to the ancient monument was changed only in the 18th century. Pope Benedict XIV took the Colosseum under protection declaring it as a place of torture of Christian martyrs.

Because of atmospheric pollution and deterioration in general, in the period from 1993 to 2000, the Colosseum was reconstructed.

Nowadays, various events are held in the Colosseum. Because of its age the amphitheatre can accommodate only a few hundred spectators. More often, events are held at the walls of the Colosseum, using it as a background. In the Coliseum, Elton John, Paul McCartney, Ray Charles and others performed.

What you can see in the Colosseum

Besides the amphitheatre, for visitors are open:

The Colosseum is located in the heart of Rome, close to Piazza Venezia and the Roman Forum. On Sundays, traffic on Via dei Fori Imperiali and on the Colosseum square is prohibited. You can use a bicycle.

The Colosseum is open daily except on 1 January, 1 May and 25 December. The entrance is paid, there are various discounts and free tickets for certain ages.