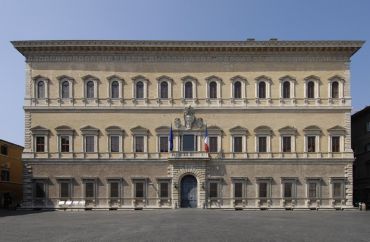 The Farnese Palace in Rome is one of the prime examples of Renaissance architecture. It was commissioned by Pope Paul III to be built by the best architects and artists of that time. For over a hundred years the palace has been serving as the French embassy. The main entrance of this exquisite three-story building faces the Farnese Square decorated with two fountains. A small marble balcony with French and EU flags that overhangs the entrance has a big sculpture of Paul’s III coat of arms situated right above it. Variously shaped windows on each level lend the palace a special charm. The building is topped by an immense salient cornice. It also offers a cozy courtyard embellished with columns and arches, and a tiny garden in the back.

However, façade’s beauty is nothing compared to the interior richness and 16th-century frescos located on the inside. Unfortunately, it is not an easy task to get in the building. You can enter it either upon the special invitation or as a part of tour group. The excursions are carried out here rarely and should be signed up for in advance.

The construction commissioned by Cardinal Alessandro Farnese began in 1514 with the help of the famous architect - Antonio da Sangallo. The works were halted due to civil unrest in Rome and resumed only in 1541. By that time the cardinal had become the new Pope under the name Paul III.

Soon Antonio da Sangallo passed away, and Michelangelo was put in charge instead. He worked on the interior design and completed the façade.

When Paul III died in 1549, the construction temporarily stopped and was resumed for the first time in 16 years by the architect Giacomo Barozzi da Vignola and later continued by Giacomo della Porta.

Wall-paintings were done by famous artists of that period. Besides that, the palace possessed a large collection of antique sculptures.

The Farnese Palace lost its significance in the 17th century. The Farnese family members moved to Parma and brought the majority of the collection with them. After that, the building became a guesthouse for eminent people.

Elisabeth Farnese, the wife of King of Spain, inherited the palace in 1731. When the place came into Bourbon’s ownership, almost all the valuable sculptures were removed. Currently, they can be found in Naples’ museums.

In 1874 French Republic government signed a rental agreement with the House of Bourbon and organized an embassy inside the building.

In the early 20th century the Farnese Palace was bought by the Italian government and leased to French embassy for 99 years.

The nearest subway station: Colosseo, however, it will take minimum 30 minutes to walk from there to the building. The C.so Vittorio Emanuele/navona bus stop is located considerably closer, look for buses 46, 62, 64, 916, 916F, N5, N15, N20. The stop for the tram №8 is a 5-minute walk from the palace.