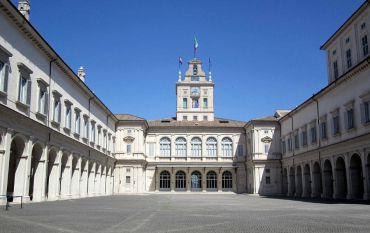 The Quirinal Palace is a building that was built in the 16th century and is located on the hill of the same name in Rome, the highest of the seven hills of the city. Currently, the palace serves as the official residence of the President of Italy. In front of the palace entrance there is the Quirinal Square, the main decoration of which is the Fountain of the Dioscuri. In the composition of the fountain there are images of two giants Castor and Pollux, famous characters of Greek and Roman mythology.

History of the Quirinal Palace

In the 16th century, Pope Gregory XVI decided to build a summer residence for himself. For this purpose the pontiff chose the most ecologically clean area of ​​the city. The construction of the palace started in 1573, but 15 years later, when the palace was still under construction, the pope died. For a while the project was closed. The creation of the residence was resumed only after the accession to power of Pope Paul V.

Several times, namely in 1823, 1829, 1831 and 1846, the Quirinal Palace was used as a venue for the papal conclave. The building was completely transferred to the authority of the Vatican and became the property of the Pope and his entourage.

In 1870, the power of the Pope was overthrown and the palace lost its greatness, but it did not last long. In 1871, Rome became the capital of the Kingdom of Italy, and monks choose the Quirinal Palace as their official residence. This had continued until 1946, that year the monarchy was abolished, but the palace still remained the main residence of the country, now it is the official working place of the presidents of Italy. Today the President of Italy lives and works here.

Architecture of the Palace

The composition of the Quirinal Palace is a two-story building with a large courtyard. The main entrance is decorated with a loggia, these days the flag of Italy, the flag of the European Union, as well as the flag with the emblem of the country are placed here. At first glance, the external facade seems simple and uncomplicated, but the interior of the palace shows all the grandeur of the residence.

Interior of the Quirinal Palace

A large collection of paintings, sculptures, furniture and tapestries of different historical periods is collected in the interior of the Quirinal Palace. Particular attention in the interior of the palace deserve: the frescoes of Melozzo da Forli and Guido Reni, chandeliers of Murano glass and many other luxurious objects.

The Quirinal Palace is divided into halls, each of which has a special interior and is unlike other objects. The most significant are:

These are only few of the halls in the palace. It is worth noting that each room is unlike the previous one and bears historical value in its interior.

Quirinal Palace is located in the historic part of Rome, you can get here by metro – the stop Barberini, from which you can walk to the palace on foot.

Opening hours: excursions to the palace are held every Sunday from 8:30 to 12:00.