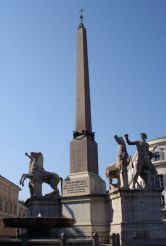 The Monte Cavallo Fountain, also known as the Fontana dei Dioscuri, is one of the most remarkable sights of Rome. It is situated on Quirinal Square, at the entrance to the eponymous palace, in the historical part of the Eternal City. Over the years of its existence, the Monte Cavallo fountain has undergone several reconstructions, due to which its composition has been greatly changed.

History of the Monte Cavallo Fountain

For the first time the Fontana dei Dioscuri was established in 1588 by the order of Pope Sixtus V. The basis for the composition was the grandiose marble statue of the castes Castor and Pollux, which was discovered during the excavation of the Term of the Emperor Constantine. The sculpture consists of the figures of two young men, Pollux and Castor, who restrain their horses.

In 1818, Pope Pius VII decided to create a completely new fountain. A well-known Italian architect, Raffaele Stern, worked on the project. His version of the Monte Cavallo fountain has survived to this day. To create a completely new and incredibly monumental Fontana dei Dioscuri he used a Roman shell made of marble, which is crowned by a large bowl, located in the foreground of the fountain's composition. Behind the bowl there is an obelisk, on either side of it there are two statues of Dioscuri.

It is worth noting that copies of the statues of Castor and Pollux can be seen at the entrance to the St. Petersburg Horse Guards. They are made from the casts of the originals.

Legend of the Dioscuri

According to the myths, Castor and Pollux are two twin brothers, the children of Leda and Zeus. There was a law for babies who were born of God and earthly woman – one was destined to become mortal, it was Castor. In one battle Castor was mortally wounded and then his brother Pollux prayed to his father Zeus – not to separate the brothers.

According to one version, God gave life to the brothers, but under one condition that, one day they will live with the gods on the bright Olympus, and another day they wander in the realm of shadows and the dead.

According to another legend, Zeus did not separate the brothers, turning them into stars, as they were inseparable, they became a constellation of Gemini.

The Monte Cavallo Fountain is located in the central part of Rome, close to the main sights of the city. The Fontana dei Dioscuri is a necessary object for visiting during excursions around Rome. The tourist can get here by using the services of public transport.