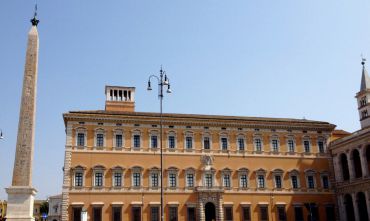 The Lateran Palace (Palazzo del Laterano) in Rome is a former papal residence. Today there is the Vatican Historical Museum located inside its building. Besides that, the palace also houses the office of the Vicariate of Rome as well as the residential apartments of the Cardinal Vicar. The Archbasilica of St. John Lateran and the Lateran Obelisk can be found here neighboring with the palace itself. The Archbasilica’s building we see today was designed by Domenico Fontana and constructed in the late 16th century. This place also boasts a wonderful courtyard and a cornice with heraldic patterned frieze set on the top of the cathedral.

History of the Lateran Palace

The palace served as an official papal residence from the middle of the 4th century till the early 14th century. It was named after the Laterani family since they once owned the land around here. In the early 4th century the territory was donated to the church for the purpose of building a Christian temple. Consequently, the Archbasilica of St. John Lateran as well as the palace were constructed.

The old Lateran Palace was reconstructed plenty of times. It had been actively extended and embellished since the 8th century so that the building could compete with Byzantine residences. The palace was rebuilt once in the 10th century when a fire occurred. However, it became genuinely great and fancy in the late 12th century.

When the Pontifical Household moved to Avignon, this place lost its significance and was nearly ruined after two blazes. That’s why in 1586 Pope Sixtus V ordered to build a new palace on the ruins of the previous one.

The Lateran Palace functioned as a hospital during the next centuries. Then a museum was established inside the building in the mid-19th century.

You can easily get here by using public transport services. The Lateran Palace is situated within 400-meter walking distance from the San Giovanni subway station.