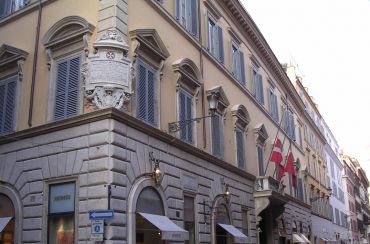 The Magistral Palace (Palazzo Magistrale) is a plain-looking building of great historical, political and religious significance located in the very heart of Rome. In the 19th century, it became the possession of the Order of Malta. Currently, Palazzo Magistrale is considered to be the most important of the two Order’s headquarters (the second one is the Magistral Villa). This three-story construction crowned with a corbelled cornice is veneered in ashlar, the walls two upper levels are painted beige. There is also a balcony with flags of the Order of Malta overhanging the main entrance and a stone plaque placed on the second-floor wall on the corner of the building.

The building which is now named as the Magistral Palace was sold in the 16th century to Antonio Bosio, son of the Order’s leader. After his death, Italian archaeologist bequeathed the place to the Order of Malta. The building served as a residence for the ambassador.

The Order of Malta, however, lost its territory and basically ceased to exist when Napoleon took over Malta and turned it into a British colony.

Then in 1834, the Order was re-established in the Magistral Palace under the Sovereign Military Hospitaller Order of Saint John of Jerusalem of Rhodes and of Malta.

The most convenient way to get to Palazzo Magistrale is by subway – get off on Spagna (line A) station and simply walk to the palace from there (takes 5 minutes).