Fountain of the Four Rivers, Rome 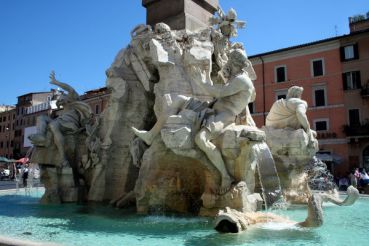 One of the most striking attractions of Rome, the fountain of the Four Rivers, appeared on Piazza Navona in 1651. It was created by the famous architect, sculptor of the Baroque Giovanni Bernini, according to the order of the pontiff Innocent X.

History of the Four Rivers fountain

In the center of the sculptural composition there is an Egyptian obelisk with a small sculpture on top – a pigeon holding an olive branch – the emblem of the Pamphili family (from where Innocent X comes from). The gods of the rivers are located around the obelisk. Each god symbolizes the main river of one of the four parts of the world, where the authority of the Pope has spread. The Nile symbolizes Africa, La Plata – America, the Ganges – Asia, and the Danube – Europe.

In addition, there are such details as fruit, vine, flowers in this architectural creation, which personify prosperity and wealth. The animals and plants – a dolphin, a palm tree, a horse, a snake, a lion – are added into the composition harmoniously. The obelisk itself is a symbol of the fact that the Roman Catholic Church seeks to eradicate paganism.

Many townspeople were against the construction of the fountain, since Pope Innocent X used money from the treasury of the city. The Romans protested against this. Merchants also acted against it, as their habitual place of work was occupied.