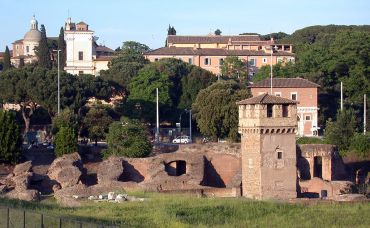 The Circus Maximus (Circo Massimo) is the largest ancient chariot racing stadium in the Eternal City. This once-grand place was 600 meters long and could accommodate over 200 thousand spectators. The oval arena took up the biggest part of its territory. There is also a gateway for a triumphal leave-taking of winners located at the far end. Then three towers were built on the other side of the arena, just where the stalls and gates for the participants could be found. A thin platform with dolphin statues and two obelisks on it lied in the center of the enclosure. Today one of the obelisks can be seen right in front of the Lateran Palace and the other one – on Piazza del Popolo. The first seat row was made out of stone, the rest were just wooden.

The stadium has barely survived to modern day. The Circus Maximus serves as a parking lot and a venue for occasional concerts and festivals.

History of the Circus Maximus

The area between the Aventine Hill and the Palatine Hill is believed to be a place where horse competitions were being held in 500 BC. However, no stationary constructions were built around there. It is very likely that this land was used for agricultural purposes and the competitions were carried out after the harvesting was done. The first evidence of construction works on the chariot racing stadium dates back to 329 BC.

Arena’s territory was expended by Julius Caesar and as a result, the circus could seat up to 250 thousand people. The lower stone row was added during times when Augustus ruled and was meant for members of noble families.

This place was doing well for many years, plenty of chariot races and games dedicated to holidays took place here. However, the circus lost its significance after the advent of Christianity. The last game held at the stadium was in the 6th century and after that, the whole area was abandoned. Only locals came here to dismantle the ancient constructions and use the pieces for their new buildings. After some time the arena was buried in dirt and garbage.

Ruins of the Circus Maximus were dug up during the construction of factory facilities. The archaeological excavations continue to this day.

The Circo Massimo subway station is located near the Circus Maximus; the stops for tram 3 and 8 are a five-minute walk from there.