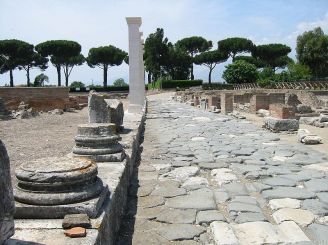 The Appian Way – via Appia – is the most ancient and famous Roman road connecting the capital of the Roman Empire with the port of Brindisi on the Adriatic Sea. The road of 570 km long provided trade between the Roman Empire and countries of the eastern Mediterranean, and had a great strategic military importance.

History of the Appian Way

"Queen of roads" was made of basalt blocks, joined with lime mortar. Appius Claudius Caudex, the Roman statesman, consul and censor, as well as an outstanding military leader, started its construction in 312 BC.The first segment, leading to Capua, had been built during around 100 years. In the year of 244 BC, roads to Benevento,Venusia and Tarentum were built. In 190 BC, people could use the paved road to Brindisi. The first 7 km along the road, noble Romans buried their dead relatives and constructed tombs for them.

After the fall of the Roman Empire, the Appian Way was abandoned. During the Renaissance, Christians, who committed a pilgrimage to the holy places of Rome, began to use it. By the 19th century, the road was destroyed and in the 20th century its restoration work started.

Today, the old Appian Way in Rome is a wonderful tourist route.

Thousands of years the Appian Way has been at the shoulder of the Roman history. Slaves who participated in slave uprising leaded by Spartacus against the Roman Republic, were crucified along the road.

Famous tombs of via Appia

The ancient Appian Way is an extraordinary monument of nature, ancient history and architecture that has been preserved over the centuries. In the catacombs near the road, poor citizens buried their dead. People say, first Roman Christians are buried in their labyrinths. One of the most famous ancient monuments – one of the symbols of the Appian Way – is the tomb of the young patrician Cecilia Metella, a daughter of Quintus Metellus, and a wife of Crassus, who was son of the famous triumvir Marcus Licinius. The mausoleum has cylindrical shape with a conical top, reminiscent of the Etruscan tumulus mounds.

On the Appian Way, one can see many tombs of the famous Romans. Among them: Seneca, Sextus Pompey and many others.

You can get to the Appian Way from the station of Termini using buses provided by Archeobus. They go every half hour on Fridays and weekends. You can also take a bus №118 from the Coloseo metro station or a bus №218 from the Cathedral San Giovanni in Laterano. During holidays and weekends, part of the road, on the territory of the famous Parco Regionale Della'Appia Antica, is closed to vehicles, so you can see the sights of the Appian Way on horseback or by renting a bicycle.