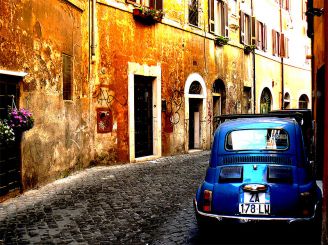 The historic Trastevere quarter is considered to be the 13th region of Rome, one of the oldest and most picturesque places of the ancient capital. Its name means "across the Tiber" - to get to Trastevere from the center of Rome you need to go across several old bridges over the river. This is one of the most colorful and emblematic areas of the capital, which preserved the traditions, architecture and numerous monuments in their original form. Here you can:

The historic Trastevere area was originally inhabited by the Etruscans and then the Romans.The emperor Augustus called the hill on the west side of Rome Janiculum, a region he called Trans Tiberim (Lat.), which can be translated as "behind the Tiber" and "The District." This place had inhabited  Romans of the middle class, and in the III century Trastevere was in the city.

In the Middle Ages the area was rebuilt many times, but the symbol of it and today are the many narrow streets, pavement carpeted and extremely picturesque low houses, entwined with green ivy.

One of the most romantic legends of Rome connected with the life of the great masters of the Renaissance – Raphael. While working on the restoration of the Villa Farnesina in Trastevere, he met in the street the beautiful Lucia Margarita, daughter of a baker. Her image captured in many paintings of the artist, including the image of the famous Sistine Madonna and Child. On the street of St. Dorothea still there is home with a memorable sign, where she lived and whose image know all connoisseurs of Italian Renaissance painting in the paintings and frescoes of Raphael.

Quarter of Trastevere in Rome is rich in historical and architectural monuments not less than the central part of the capital. In Trastevere you can see these attractions and monuments:

During walks in the Trastevere you can visit the cozy cafes and restaurants and enjoy authentic local cuisine, and go to small shops to choose a souvenir. Small cozy area with fountains in the evening are transformed into the stage for artists - amateurs, of their performances you can get a real pleasure.

To the Trastevere district you can reach by bus from Termini Station; by tram number 8 from Piazza Venezia. You can also take a walk to the Bridge Ponte Sisto. Crossing it, you will find yourself in an area Trillusa and start the journey on Trastevere. If you walk from Circo Massimo, you can proceed to the Pons Fabricius, sightseeing Tiber Island, and come to Trastevere.