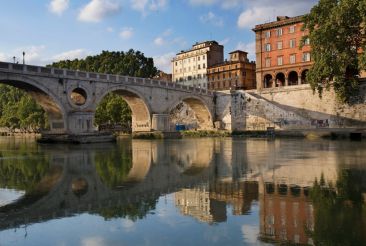 Ponte Sisto is a pedestrian bridge in the central part of the Italian capital – Rome. It connects the two banks of the Tiber River, stretches from Pettinari Street (Regola area) to Trilussa Square (Trastevere district). Ponte Sisto was built in the middle of the 15th century. Thanks to its convenient location in the central part of the city, close to the main historical sights, the Ponte Sisto is recognized as one of the most interesting places for tourists to take a walk in the Eternal City.

In the period from 4th to 5th century, the ancient wooden Pons Aurelius was located on the site of the present Ponte Sisto. Later, in historical literature, we can find it under the title "Anthony's Bridge" and "Pons Antonini in Arenula." This bridge was destroyed in 772.

In the 15th century a new life begins for the Ponte Sisto. Construction lasted for 6 years, from 1473 to 1479, commissioned by Pope Sixtus IV. It was in his honor that the bridge got its name – Ponte Sisto. The construction was conducted under the guidance of the famous Italian architect Baccio Pontelli.

The composition of the bridge Baccio Pontelli consists of four arches with a large round hole in the center. It is known as occhialone, which means "eye", and has a specific function – to indicate changes in the water level in the river.

Ponte Sisto Bridge is recognized as one of the noisiest and briskest bridges in Rome, especially in the evening, due to the fact that it connects two historical areas of the city – Trastevere and Campo di Fiori. Therefore, the tourist will have no troubles getting here.

You can visit the bridge while walking along the main sights of Rome, and also the routes of public transport are laid here: