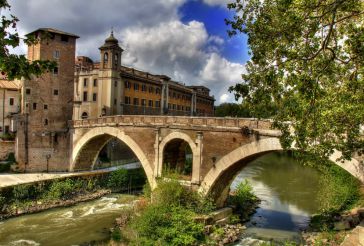 Bridge Pons Fabricius (Ponte Fabricio), now better known as the Quattro Capi, or the Bridge of the Four Heads, is one of Rome's oldest bridges. The building dates back to the 1st century BC. Fabricio connects Tiber Island with the left bank of the Tiber River. It is located in the central historical part of Rome, close to the main sights of the city.

According to the accounts of historian Dion Cassius, the Quattro Capi Bridge was built by the Roman road curator Lucius Fabricius in 62 BC. On the site of the old, burnt in the fire wooden bridge. The length of the bridge is 62 m, and the width of its arches reaches 24.5 m.

The first reconstruction of the bridge was carried out after the flood in 23 BC. Then, under the project of two city architects Marcus Lollius and Quintus Aemilius Lepidus, some corrections were made to the bridge design, which improved its structure.

Why the Bridge of Four Heads

Among residents and guests of Rome, the Fabriccio Bridge is better known as the Bridge of Four Heads. It received this name thanks to four sculptures, arranged on the parapets of Quattro Capi. According to the legend, Pope Sixtus V during a short period of his reign has restored 5 bridges, including Pons Fabricius. The project belonged to four architects, who in the course of the work strongly quarreled and began to feel terrible resentment towards each other. Learning about this, the Pope ordered them to be executed and in memory of them to build a monument, thereby giving architects an eternal neighborhood.

According to another version, the stelae that are installed at the beginning of the bridge are antique sculptures depicting the four heads of pagan gods: Hercules or Janus.

Ponte Fabricio is located in the central part of the city of Rome, not far from many historical attractions of the city, including the Colosseum. You can reach the bridge by public transport: fixed-route taxi No. 83, 160, 170, 628 (the stop is Petroselli Street).