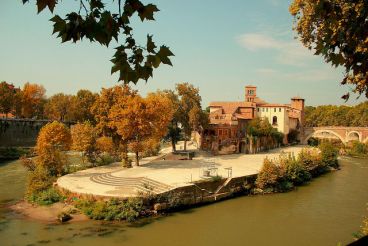 Tiberina or Tiber is a small island on the Tiber River, in the heart of Rome, near the Porticus Octaviae and the Theatre of Marcellus. The length of the island is 300 m and the width is 70 m. Quay of the island lies in stone and has the shape of a boat, the river at this place falls a little cascade, creating a picturesque scene.

Stone Fabricius Bridge is the most ancient construction of Rome across the Tiber River. The bridge was built in 61 BC, named after the Roman road builder Lucius Fabricius and has a length of over 60 meters.

Pons Cestius was built in 45 BC and named for the ancient Roman family.

In the III century BC, in the Rome was the plague. From the predictions of the Sibyl Kuma it followed that to stop the disease they had to build a temple in honor of Aesculapius. A snake, as a symbol of  healing, had to choose a location for construction , and it should be delivered from the Greek city Evpidar.Equipped Roman Senate ship has brought the snake to port.The sacred symbol of medicine crawled out and went straight to the island of the Tiber, which was seen as an indication of the gods.

Soon, on Tiber Island was built the Temple of Aesculapius, and the plague ceased. Island grateful Romans decide to revet with travertine and give it the shape of a ship floating in Evpidar.

On the small island there are several historical and cultural attractions of  Rome.The island is associated with the hope of healing for many centuries.Today there is acting Fatebenefratelli Hospital. From the sights of the island you can view:

How to get to the island

On the Tiber Island you can reached on foot through the Pons Fabricius.You need to geton the subway to the station Circo Massimo, walk along the promenade to the bridge and get to the island. On the island across the right bridge, you can reach the Trastevere district, which is famous for its cafes and restaurants where you can have a tasty lunch.