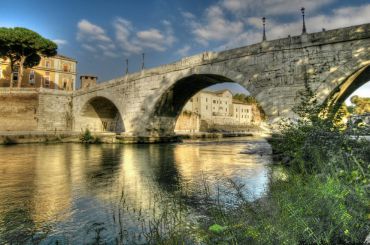 Pons Cestius, also known as the Saint Bartholomew Bridge, is one of the oldest bridges in Rome. It is located in the central historical part of the city, close to the main sights. The bridge passes over the Tiber River and connects the Tiber Island with one of the districts of the city – Trastevere.

History of the Pons Cestius

According to historians, this bridge was built according to the project of the famous architect Lucius Cestius, the supposed construction period – 60-40 BC. The bridge received its name in honor of the author.

Over the entire period of its existence, the bridge was rebuilt several times:

In the 15th century Pons Cestius was renamed again, then it began to bear the name of St. Bartholomew, this decision was made not by chance, because the bridge was the road to the church of the same name, which was located on the island.

In the 19th century, one of the most important events took place in the history of the bridge, as the Tiber River channel was cleaned, its width increased from 48 to 76 meters. However, in order to preserve the ancient bridge, the descendants decided to rebuild it to the desired size. For this purpose, in the years 1888-1892 two outside arches were reconstructed, previously their size reached 5.6 m, and after the repair it was leveled with the size of the central arch – 22.5 m. Saint Bartholomew's bridge in Rome has survived to this day.