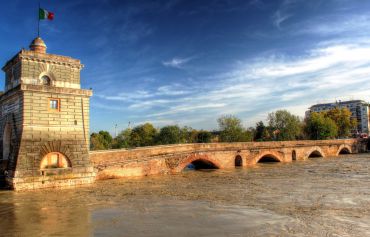 Ponte Milvio is a bridge across the Tiber River, which is located in the northern area of ​​the city of Rome. Previously, the bridge was part of the ancient Via Flaminia, which was built in the 1st century BC and connected Rome with the coast of the Adriatic Sea. At present, the bridge is one of the city's most striking sights – a place where couples hang locks in honor of their love, and the key is thrown into the waters of a restless Tiber.

History of the Ponte Milvio

The first mention of the Ponte Milvio dates back to 207 BC in the works of historian Titus Livy, in which it is said that the bridge was built according to the project of the architect Marcus Aemilius Scaurus in 109 BC. Due to its location in one of the most important strategic locations of the city, it witnessed many battles and wars:

For many years, Roman soldiers were training in the bridge area, and it was in this place that the generals gathered troops, both for the defense of the city, and for new conquests and expeditions.

Even after the end of the ancient era, the bridge continued to be a strategically important military object. As a result of several battles, the bridge structure suffered greatly. The worst was the damage caused by Garibaldi's soldiers in April-May 1849. Ponte Milvio was restored only in 1870.

Until 1956, the bridge was the most important transport artery in Italy, until it was declared a monument of antiquity. Currently, the Ponte Milvio is exclusively pedestrian.

Events of the war years, as well as natural disasters and floods, made some corrections in the composition of the bridge, but for the most part the bridge remains the same as it was in the time of the ancient Romans.

In 1992, the book of the Italian writer Federico Moccia "Three meters above the sky" was published after which the Ponte Milvio became a true Roman "bridge of lovers". This place is a favorite place for Roman honeymooner (here they attach locks as a sign of eternal love). However, the bridge keepers are forced to periodically cut them, because large amount of metal began to threaten the safety of the ancient bridge.

In order to get to one of the most romantic places in Rome, you should use public transport routes in Rome: