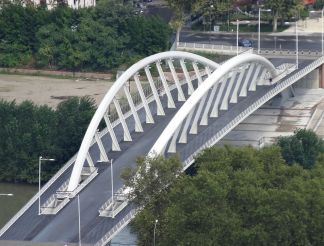 One of the newest bridges in Rome is Ponte della Musica. It connects two banks of the Tiber River. The bridge attracts tourists with its elegance and style. This is a great place for a leisurely walk. It is worth noting that this is a completely new landmark of the capital, built in the 21st century.

The bridge was erected in 2011. For the right to construct it, several leading architectural firms fought. The grant was won by a British firm. Under the leadership of several London architects, the creation of a bridge began.

Ponte della Musica is strikingly standing out from other bridges by its forms. It combines both elegance and strength. The wide walls of the bridge and strong supports are framed by a metal carcass. It looks like an ancient dragon has appeared above the water to warm up in the sun its crest. During the construction of the bridge, quite unusual materials – reinforced concrete and steel – were used. Looks very impressive! A few years after the bridge was built, the authorities decided to devote Ponte della Musica to the Italian pianist and conductor Armando Trovajoli. That's why the bridge has such a musical name. Initially, the bridge was only pedestrian.

A few years later, the movement of public transport was allowed. But Ponte della Musica remains a safe place for walking.

To get to Ponte della Musica, you need to take the bus № 168 or № 910 to the stop "Pinturicchio". Then go down to the river through two quarters.