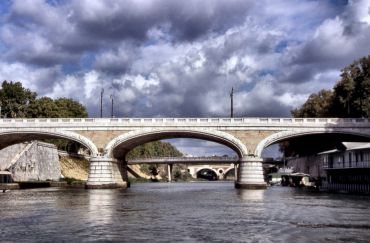 The Queen Margarita Bridge, also known as Ponte Regina Margherita, is one of the bridges of Rome, which connects two districts of the city: Liberty Square in the Prati District, and the Lungotevere Arnaldo da Brescia in the Campo Marzio area. The building belongs to the architectural masterpieces of the late 19th century, its history, as well as its unusual architecture attracts tourists from all over the world.

The construction of the Ponte Regina Marguerite was carried out according to the project of the famous Italian architect Angelo Vescovali, the author of another urban masterpiece – Ponte Umberto I. The bridge was named in honor of Queen Margarita of Savoy, the first Queen of the United Italy and the wife of King Umberto I. The construction of the bridge cost the city almost 2 million 800 thousand lire.

It is worth noting that this bridge was the first bridge across the Tiber River, which was built after a break of several centuries. The composition of the bridge is represented by three arches, in length Ponte Regina Margherita reaches 1103 m, and in width – up to 21 m.