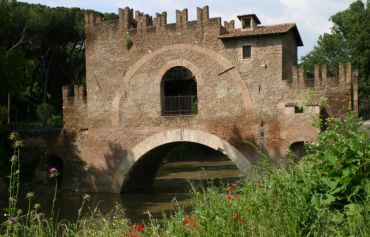 The Nomentano bridge, also known as the Ponte Nomentano, is the oldest of all the bridges of Rome. It was built during the period of antiquity and was then located outside the Eternal City, behind the Aurelian Walls, at present it is the north-eastern part of Rome.

In ancient times, Ponte Nomentano that served as protection of the northern way to Rome, was also known as the medieval bridge tower. During this period the length of the bridge was 60 meters. As the ancient records of the Roman historian Procopius read, in 547 BC a black streak in the history of the bridge came, when by order of the Roman emperor Totila it was completely destroyed.

However, in a very short time, just 5 years later, under the leadership of the Roman General Narses, the Ponte Nomentano was completely restored.

In 1849, for protection from the French troops, the bridge was shortened by 7 m, but immediately after the end of hostilities everything was restored.

At present the length of the bridge is 32 m, it is decorated with two towers – the construction dates to the period of the reign of the Roman Pope Adrian I. Ponte Nomentano is located in the park area, which gives this landmark special beauty and color.