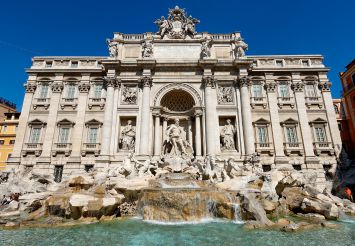 Palazzo Poli is located on Piazza di Trevi, one of the most beautiful squares in Rome. The XVI century palace, built in the Baroque style and constitute a single ensemble with the Trevi Fountain. In the XVII century the Duke of Poli  became the owner, he was relative of Pope Urban VIII. Since then, the palace named after him – the Palazzo Poli.

In the 30s of the XIX century on the top floor of the palace  lived the famous poet and singer, owner of musical-literary salon – a  beautiful princess Zinaida Volkonskaia. Guests of musical evenings and literary readings were Bryullov, Zhukovsky, Tyutchev, Stendhal, Aleksandr Ivanov, Sir Walter Scott. There Nikolai Gogol read his «The Inspector General».

The exterior of the Palazzo Poli

Modern facade of an old medieval Palazzo Poli in Rome, designed by the famous architect Luigi Vanvitelli, who built the palace of Caserta.

Nicola Salvi and Pietro Bracci created a real masterpiece on its facade. Great god of the oceans Neptune leaves the main entrance of the Palazzo Poli in a chariot – a shell drawn by sea horses. Two Goddess of Healing and Abundance are located in the rectangular building niches and complement the overall ensemble of the Trevi Fountain. Both sculptures are made by Filippo Valle. The relief on the left side of the fountain depicts Agrippa studying aqueduct. Relief on the facade of the palace on the right depicts the Virgin, which had found the source of Legionnaires' Acqua Vergine. Author of the sculpture is Giovanni Grossi.

In the XIX century BC, Roman statesman Marcus Agrippa decided to provide drinking water to the capital of the empire and build the aqueduct. To find the source, he outfitted a detachment of legionaries. The Roman soldiers in a long way, were thirsty and for a long time could not find a source of water. Quite desperate legionaries already decided to return to the capital, but on the road they met a beautiful maiden Trevi, which showed the source of the water a few kilometers from Rome.

Soon, from the source was held the aqueduct , which was named in honor of the girl – Acqua Vergine. Her image is on the right of the bas-relief of the Palazzo Poli, and the name of the Trevi fountain, according to one legend, the name comes from her name Trevi.

National Museum of the graphics in the Palazzo Poli

Nowadays, in the Palace is the National Museum of graphics and design, where the exhibition of graphic works by famous contemporary artists.

Visiting the Palazzo Poli, you can go for free on one of the exhibitions of contemporary visual art, which shows:

Having been in the palace Poli, you can see the famous Trevi Fountain from above.

Palazzo Poli is located in  Rome, Palazzo Poli (Fontana di Trevi) via Poli, 54.To get to the Palazzo Poli, you can on the metro to Spagna station on branch A.