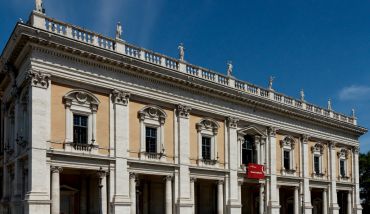 The Nuovo Palace (Palazzo Nuovo) is considered to be a part of the Capitoline Museums in Rome. Its façade looks like it’s reflecting Palazzo dei Conservatori located on the opposite side of the Capitoline Square. This was an idea of the great Michelangelo who wanted to create a harmonious area here. The construction works began in 1571 and lasted for over 80 years. Girolamo and Carlo Rainaldi assumed the leadership of the project after Michelangelo's death.

Originally the building was used as a place for keeping antique sculptures. The first public museum in Rome was established in 1734 inside this very palace.

You might encounter the Marforio Fountain hiding in the courtyard as well as a statue of a sea god carved out of marble which dates back to the 1st century AD. The enclosure itself is decorated with exquisite sculptures and columns placed on either side. There is also the Hall of Egyptian figures located in the courtyard.

The first floor which is designed as an atrium features a unique statue of Minerva, Oriental and Greek collections and a hall dedicated to memorial exhibits.

The second floor offers a gallery where there are sculptures of ancient dieties and heroes set on each side. You can find a number of halls behind it:

The Nuovo Palace (means “New palace” in Italian) is located near the Roman Forum. Colosseo (as well as the Colosseum itself) is the closest subway station, the building you’re looking for is a 15-minute walk from here. The Cavour station is located a bit further.

You can catch plenty of busses and a tram at the palace:

Please mind: the last admission is allowed one hour before closing time.

Admission: if you want to see the rich interiors of the palace and all the collections displayed inside, you will need to purchase a ticket for the Capitoline Museums which costs 15 Euros. The museum offers free admission for children under six as well as people with disabilities and their companions.