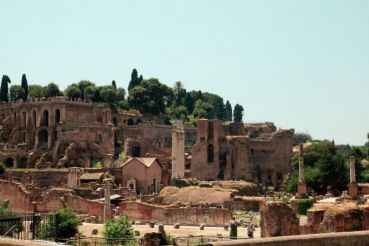 The Roman Forum (Foro Romano) played an important role in the political and economic life of the city in the era of the prosperity of ancient Rome. One of the most famous sights of the capital of Italy is situated between three hills: Esquiline, Capitoline, Palatine. For many years various structures were built in the valley between the hills. Ruins of many ancient buildings today constitute one huge archaeological complex under the open sky. All of its exhibits emphasize the former greatness of the Eternal City.

Not only tourists visit the Roman Forum. Many directors choose this place for the filming of their films.

History of the Roman Forum

Once upon a time, more precisely until the 8th century BC, it was a swamp area among the hills, which was used as a cemetery. A reliable drainage system built during the reign of the fifth king of Ancient Rome, Tarquin the Elder, allowed to drain these places.

The central square played an important role in the life of the ancient city. Initially, there was a market trade, followed by meetings of the Romans and the Senate. The years passed and the rulers changed. Together with them, the forum also changed. During the reign of Augustus, it reached the peak of his development. The Foro Romano became the most important focus of the social, political and religious life of Rome.

With the emergence of Christianity, churches were built in the forum. After the collapse of the Roman Empire, for a long time the main square was once again in desolation. In the Middle Ages, cattle was grazing among ancient ruins, from which the second name of the ancient center appeared – Campo Vaccino (cattle field). Local residents dismantled the grandiose buildings for building material. This continued until the 19th century, until archaeologists and restorers took up the preservation of evidence of the power of ancient Rome.

The period of Benito Mussolini's rule was a dark period for the archaeological complex. At this time excavations were not very sparing, so many valuable exhibits were lost for good.

Today, excavations of the ancient forum are one of the main tourist sites of Rome. Among the surviving reminders of the great past today you can see:

The ticket office closes an hour before the closing of the Forum. Days off: December 25 and January 1.

Entrance fee: 12 euros. Admission is free on the first Sunday of the month. For an additional fee, you can purchase an audio guide or a tour guide. Visiting the Forum during the organized excursion, of course, will be more informative.

It is worth noting that a visit to the Roman Forum, the Colosseum, which is located very close by, and the Palatine, is carried out on a single ticket. You can buy it at the cashier of any of these objects. The ticket is valid for 2 days. Data of January 2018.