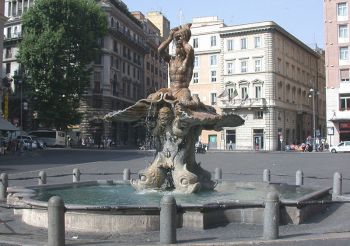 Rome is known all over the world for its magnificent fountains. The Barberini fountain is one of them. It was built in 1642. The Pope Urban VIII (representative of the Barberini family) commissioned it. He was of noble origin and by the standards of that time had a good education. The size of his personal library was amazing, and he was familiar with the eminent thinker of the Renaissance Galileo Galilei. In 1627, the Pope decided to build a large and refined palace for his family. When the building was almost ready, he instructed the architect Giovanni Lorenzo Bernini to sort out the nearby square. By the way, he had previously worked on the project of the palace.

It is worth saying that the Triton Fountain in Rome was built according to radically new standards: it was externally different from other fountains of the Eternal City. In the center of the bowl there are four dolphins and they hold a shell on their tails. On it, the architect installed a statue of Triton – the son of heroes of ancient Greek mythology Poseidon and Amphitrite. A powerful spring of water rises upward from the bowl that Triton holds.

The architect placed the family coat of arms and headdress of the Pope (tiara) between the dolphins to immortalize Barberini. For several centuries now the inhabitants of Rome and the guests of the city have had a chance to see the fountain, which impressed its contemporaries with its bizarre forms.

By the way, in the same area you can see one more creation of the architect Bernini – a Fountain of the bees.