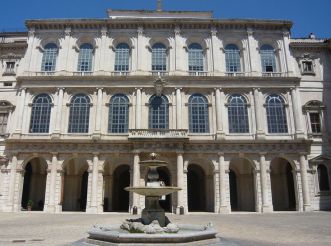 Palazzo Barberini is a palace in Rome, located on the street of  Four Fountains, in the eastern part of the city. It belonged to the family dynasty of Barberini, the construction took place according to the order of Maffeo Barberini, who in 1623 was elected Pope and bore the name of Urban VIII. Nowadays the National Gallery of Antique Art is located in the palace building.

In 1625 the newly elected Pope Urban VIII purchased a piece of land on the Quirinal Hill and decided to build his own residence there. In the period of antiquity, there was the temple of the goddess Flora, as well as several ancient churches. Later on this place was the mansion and vineyards of yet another influential family in Rome, Sforza.

The construction of the palace started in 1627, the most famous architect of Rome of the 17th century – Carlo Moderna was invited to work here. Originally, the palace project was a quadrangular building in the Renaissance style. However, during long negotiations with Pope Urban VIII, the project was changed: the building acquired a complex structure, on both sides of which appeared wings. In the architecture they recreated the outlines of the Quirinal Hill.

The construction of the palazzo was completed in 1633.

For the first time in history, a huge garden was planted around the palace, but later the park alleys were divided into plots and sold for the creation of buildings for ministries.

The Significance of Palazzo Barberini in the Cultural Life of Rome

During the reign of Pope Urban VIII, the residence of Barberini has become a center of the cultural life in Rome. During this period, the most famous and talented scientists, sculptors, writers and poets of all Italy gathered in the walls of the palace.

For several years tapestries for palaces were made in the walls of the Palazzo Barberini in Rome. The work was carried out under the strict guidance of Pietro da Cortona, as well as the artist Jacopo della Riviera. All the masters were invited from the Flemish region.

On the top floor there was a library of Francesco Barberini, whose collection included about 60,000 printed copies, as well as 10,000 manuscripts. In 1900 the library together with antique furniture was bought by the Vatican, where it is still stored.

You can reach Palazzo Barberini by public transport. Thanks to a convenient location in the central part of Rome, you can take: