Fountain of the Bees, Rome 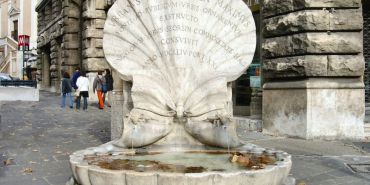 The fountain of bees in Rome dates back to the mid-17th century. It is located on Via Veneto, near the Piazza Barberini. The composition of the fountain and its rich history will not leave any traveler indifferent.

In 1644, active work was carried out on the construction of new fountains in Rome. The project was headed by Pope Urban VIII. After the completion of the work on the creation of the Triton Fountain, on April 6, 1644 the Pope instructed the architect Gian Lorenzo Bernini, to design a drinker for the townspeople. The work was completed in the same year.

The new project of the master gave the city a truly grandiose fountain. Previously, masks as well as sarcophagi were used for drinking fountains. Gian Bernini also introduced the fountain as a huge shell of a shellfish, the bottom of which was a pool. For his project, the master chose one of the most high-quality and expensive materials – Carrara marble.

On the upper leaf of the shell there is an inscription that tells both the inhabitants of Rome and travelers who is its main customer and creator. The shell is put on stones that were never touched by the hand of the master. The primal and rough beauty of the pedestal emphasizes the elegant and laconic lines of the shell.

Three small bees became a special decoration and the main architectural gem of the fountain. The image of these insects was chosen not by chance. These hardworking and profit-making animals decorate the family coat of arms of Pope Urban VIII Barberini. Looking at the composition of the fountain, it seems that the bees sat down on the fountain to quench their thirst, but they themselves generously hand out water to everyone who wishes, letting the thin crystal streams into the sink.

In the late 19th century, Rome was reconstructing the city's squares. In 1865 the Fountain of bees was located on one of the streets of the Eternal City and, thanks to Rome's actively developing road system, the fountain became an obstacle to traffic. The Rome’s government decided to demolish the fountain and send it to storage in one of the municipal warehouses.

The decision to restore Fontana delle Api was made only in 1915, and it is a pity, but by that time most of the fragments of the fountain had been completely lost. The Italian sculptor Adolfo Apolloni worked on the project to restore Fountain of bees. Only the central part of the composition has remained from the original fountain to the present day, as well as fragments of several bees. For a new fountain cheaper material – travertine was used.

It was decided to find a cozier place for the restored fountain and it was put at the beginning of Via Veneto, near Piazza Barberini. The grand opening of the renovated fountain took place on January 28, 1916.

In the 21st century the fountain of bees was also reconstructed twice: in 2000, a planned restoration was carried out, and in 2004 the vandals recaptured the head of one bee, which was replaced by a copy.

The fountain of bees in Rome is located in the central historical part of the city, at the corner of San Basillio and Vittorio Veneto streets, near the corner house. It is not very difficult to get here, for this you should use the services of public transport: