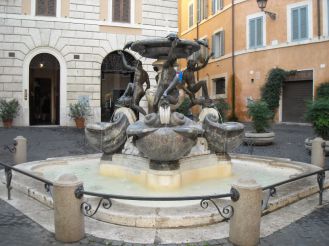 The fountain of turtles in Rome is recognized as one of the most charming fountains of the central part of the Eternal City. It is situated on Piazza Mattei, close to the main historical and architectural sights of the city. The period of creation of the creation is the end of the 16th century. The author of the project Fontana delle Tartarughe, who created it in the late Renaissance style, was the Italian architect Giacomo della Porta, as well as the sculptor Taddeo Landini.

History of the Turtle Fountain

The fountain of turtles, like many other fountains of Rome, was created to provide the city's population with drinking water. The design entered the group of 18 Renaissance fountains, which were built in the Eternal City by order of Pope Gregory XIII, during the reconstruction of ancient Roman aqueducts.

Initially, the water came into the fountain from the aqueduct by gravity, but its amount was not enough to fully ensure the work of the fountain. After several years of its operation, the fountain was restored, four figures of dolphins were transferred to a fountain in the square Campo dei Fiori, and then to the church of Santa Maria in Valicella.

In 1664 the first engraving of a fountain was created, on which there are no sculptures of turtles, since they were added later.

For many years the fountain of turtles bore the name of the Italian Duke Mattei, whose family financed the creation of the fountain. According to the legend, it was created so that to impress the Duke’s future father-in-law and that he would agree to give permission to Mattei to marry his daughter. The best view of the fountain was from one of the windows of the central facade of the palace. The sight amazed the future father-in-law that much that he immediately agreed to a marriage. However, this legend can easily be challenged, because the palace was built much later than the fountain.

Due to its unusual and original composition, as well as an interesting legend, the fountain was very popular. In 1588, writer Girolamo Ferrucci recognized the Fountain of turtles as one of the most beautiful and perfect fountains of Rome. An image of a fountain of turtles can be found on the canvas of the artist Giovanni Battista Falda.

In the 17th century, the composition of the fountain amazed the minds of the townspeople so much that it was erroneously mistaken for the work of Raphael and Michelangelo. The fountain project partially repeated the already existing fountain designs. In the lower part on the pedestal of the fountain there was a ball of African marble, from which the water went upwards, and then flowed tot the top into a polygonal bowl. The pool is square in shape, with marble bowls on four sides.

The main decorations of the fountain are the figures of four naked boys, as well as eight dolphins. They were executed in the style of Mannerism, following the example of the Florentine fountain of Neptune. Initially, the project of the Fontana delle Tartarughe was to create figures out of marble, but later it was decided to perform them in bronze. During the creation period the composition of the fountain there was a project in which figures of four young men threw their feet on the dolphins' heads, holding on the tails and trying to reach the top bowl, to other dolphins. However, after the removal of four dolphins, the composition began to seem unjustified. In order to solve this problem, a new fountain project was adopted, according to which figures of turtles settled on it, they became its main symbol.

The reconstruction was carried out by order of Pope Alexander VII, and lasted from 1658 to 1659. The figures of the turtles turned out to be very realistic. There is an opinion that they were made on casts from real turtles. In 1979, one of the turtles was stolen and the authorities of Rome replaced the originals with copies.

In many guides, you can read information that it is hard to find a fountain of turtles, but it is located in the central part of Rome. The tourist can get there both on their own, and on public transport.

The fountain is located in the 20 minutes walking distance from the Colosseum and 5 minutes from Venice Square. From the side of the Mount Capitolino, you should go down to the Marcellus Theater, in front of which you need to turn on a small pedestrian street to the right.