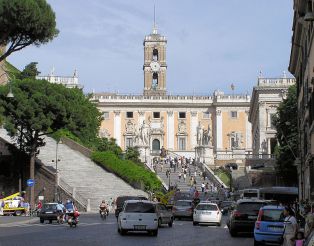 The Capitoline Hill (Campidoglio) is the lowest one of the seven hills of Rome. Its history dates back to ancient times. According to the popular Roman legend, it's here that the she-wolf fed the brothers, Romulus and Remus, who became the founders of the city. The Capitoline Square, shaped like a trapezium and framed by various edifices, was built in the 17th century. Michelangelo himself was the author of the project. The Capitoline has not lost its former charm until today. Most city guides recommend walking around this area as one of the principal activities when in Rome.

History of the Capitoline Hill

The history of Monte Capitolino began about 2,5 thousand years ago. Its name derives from the Roman god Jupiter Capitolinus. In ancient Roman times, a sumptuous temple of Jupiter Capitolinus was built on the hill which became a place of meeting for the Senate and people. The shine was also neighboured by the temples of Juno Moneta and Minerva.

With the advent of Christianity, pagan edifices were left desolate and were almost completely destroyed. Pope Paul III set to revive historic buildings in 1536. He offered Michelangelo to realize his ideas of the redecoration of the hill. An ingenious artist and sculptor turned the Capitoline Hill into a real masterpiece of town planning which has remained one of the icons of the Eternal City.

Attractions of the Campidoglio

It's been a long time since the slopes of the legendary Capitoline hill had any ancient buildings, but, nevertheless, it still has many unique sights shrouded in history:

The Capitoline Hill is situated not far from the Palatine Hill. The easiest way to reach it is by metro. The landmark is 10 minutes’ walk from Colosseo station.

Opening hours: the Capitoline Hill is accessible for tourists at any time of the day. As a rule, the museums are open from 09:30 to 19:30 every day, except public holidays.