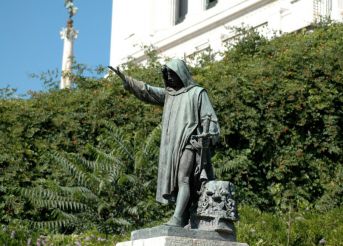 On the slope of Capitoline Hill, near the Basilica of Santa Maria of the Altar of Heaven, you can see a monument to a man in a hood that stretches out his hand over the city. It is a statue of the tribune Cola di Rienzo – a prominent and highly controversial personality, who contributed to the history of medieval Rome. The monument is one of the best works of the famous Italian sculptor Girolamo Masini.

Who is Cola di Rienzo

A simple man who was the son of a laundress and innkeeper. Surprisingly, Nicola di Lorenzo Gabrini, being not of a noble origin, in the Middle Ages was able to obtain a higher education, became the author of a book about Roman monuments, was an inborn speaker and most of all dreamed of the return of Rome to its former greatness.

In 1347, Cola di Rienzo led a popular uprising, as a result of which Rome was declared a people's republic. He called himself a tribune and rose to defend the rights of the people. Yet a controversial policy, inflated taxes on the maintenance of the mercenary army and tyranny undermined the reputation of Nicola. In 1354, the angry people cracked down on the politician near the place where his bronze statue is today.