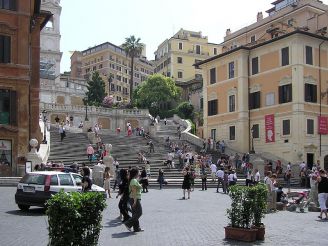 The Spanish Steps were built in the middle of the 18th century as a set of 138 wide cascading baroque steps to connect Piazza di Spagna with Trinità dei Monti titular church. This attraction is located on the Pincian Hill, which, by the way, is not a part of the Seven Hills of Rome. This place is more than just one of the most famous landmarks – here begins your shopping in world-renowned fashion houses.

History of the Spanish Steps

It all started in the 16th century. During that time the Trinità dei Monti church was supported by kings of France. Back then, French monarchs were related to the Spanish, whose embassy was situated on one of Rome’s squares. Because of that, it was named Piazza di Spagna. French diplomat Étienne Gueffier decided to connect two significant places – the square and the church – together with the steps in order to strengthen relations between two European countries.

Gueffier wrote a will where he bequeathed 20000 scudi as funding for planned construction. Cardinal Mazarin encouraged the idea and suggested setting a monument to French king Louis XIV on the top of future Spanish Steps. However, Pope strongly disapproved of the proposition. As a result, the construction of French-Italian attraction was delayed until king’s death.

In 1717, the work on the steps resumed and the search for specialists began. Italian architects Francesco de Sanctis and Alessandro Specchi participated in the creation. The construction was started in 1723 and lasted for two years. Surely, the idea of building a statue of French king was abandoned. The Spanish Steps was decorated with traditional symbols of papal authority and the fleur-de-lis of European House of Bourbon.

You can get to the Spanish Steps by subway if you take line A. Get off on Spagna station and walk to Piazza di Spagna. You can also take buses 119, 117, 116T or 116. Trinità dei Monti stop is the one you need.