15 places you must visit in Venice

Venice. This is one of the most famous cities in Italy and in the whole world! Its main feature is a historical centre of the city built on piles of alpine larch on more than a hundred of small islands linked by a cobweb of tiny bridges. This is the place where water canals are used instead of high ways, and gondolas with motor boats replace speed cars. This city is filled with the atmosphere of love romance and at the same time with dark and sad memories of medieval times events. Besides, it is the motherland of world famous carnival and film festival.

And if you have a chance to visit this place, check our “Must-list” where we have gathered all the most interesting sights of Venice. But before going there take care of your stay and choose an appropriative room/suit which will meet all your needs: location, facilities and price, of course. Look through the biggest list of properties in Venice here.

This is one of the main “streets,” which stretches along the whole city and separates it into two parts. Canal Grande is 4 km long and from 30 to 70 m wide. The both banks of this azure artery are built with true works of architectural art of 12th to 20th centuries. You can find all possible styles of architecture here: Venetian-Byzantine style, Gothic, Baroque. Don’t be in a hurry to explore the city, come here for a while to feel the fresh breeze on your skin and to enjoy fantastic views of gondolas, boats, river trams and water taxis caring their passengers up and down the canal. That all is Grand Canal. 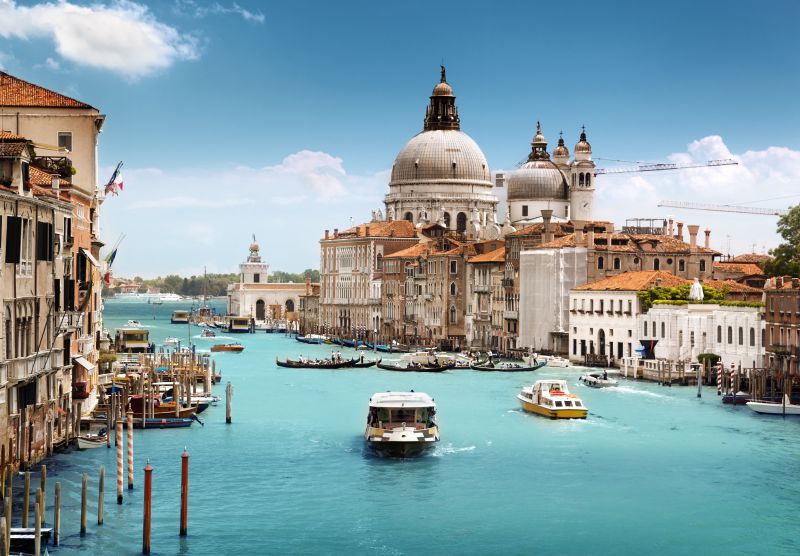 The Golden House (today Santa Sofia Palace) is one of the most charming and elegant palaces, built on the banks of Grand Canal. It got its name due to gold leaf used for the façade’s decoration in past. This building is a wonderful example of Venetian Gothic. Galleria Giorgio Franchetti opened in early 1927 is located inside. Here you can see the works of Bartolomeo Bellano, Vittorino da Feltre, Titian and others. 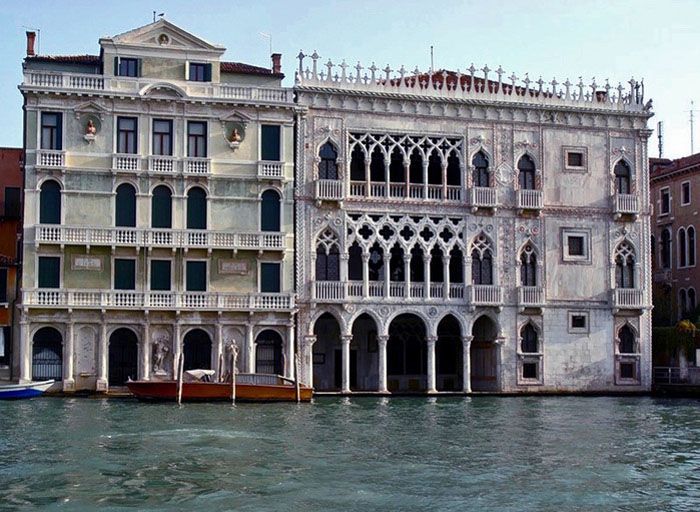 The most famous and most visited bridge of Venice links the banks of the Grand Canal. This 48-meters long arch bridge covered with market stalls appeared in the 16th century and now is famous as the best shooting place in the city. Everyone who comes to Venice takes a picture of himself here. It is Rialto Bridge. 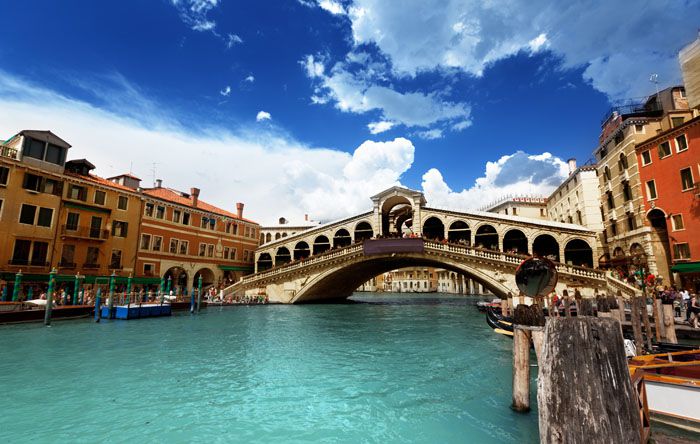 San Marco Cathedral and the Square

This is the doves’ heart of the city. The piazza is hugged by the buildings of old and new procuracies and crowned by San Marco Cathedral. According to the legend, this work of art had been erected for keeping the relics of San Marco more than 400 years ago. Nowadays it is considered to be one of the most beautiful Catholic temples on Earth. The square is also famous for its campanilla (Bell Tower) as well as for big number of shops. Thus it is a popular shopping destination. 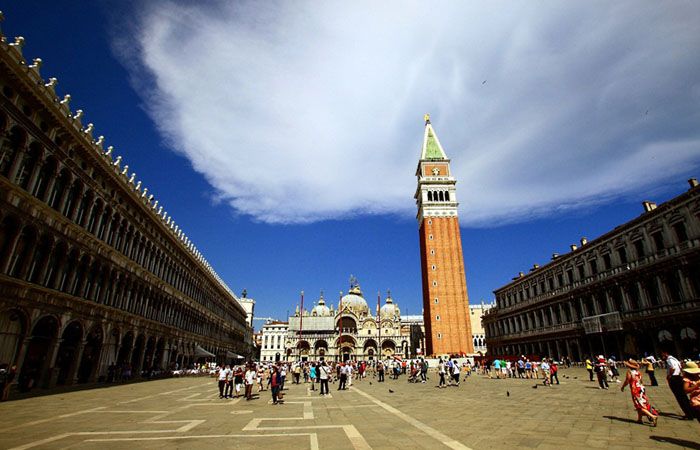 Another sight of San Marco Square is a local timepiece which shows the time marked with Roman and Arabian numbers as well as the lunar phase and position of the sun in the zodiac. Besides the statues decorating it are among the best ones in the whole Italy! If you want to enter the tower you should order an excursion beforehand, as they are held only 4 times a day. The groups allowed may contain up to 12 people max. 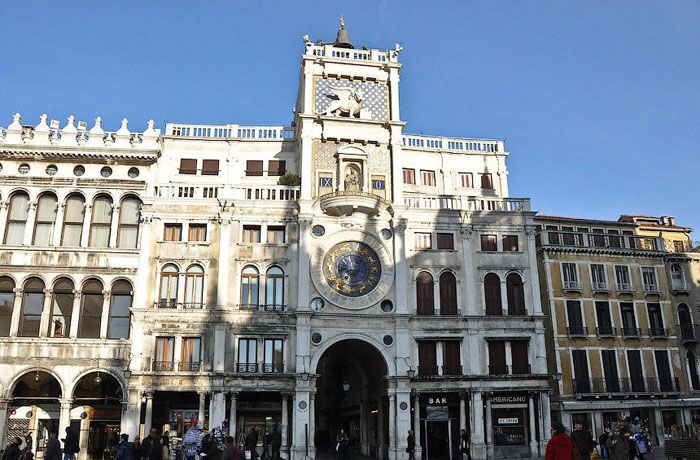 Among places you should see in Venice, there is of course Doge’s Palace. Gorgeous residence of the honorable government of Venice republic of 8–18th centuries is a true architectural work of art made in the Gothic style. Beside the memories of the doges’ times, locals have also remembered the age of the secret police and their head office housed in the palace. 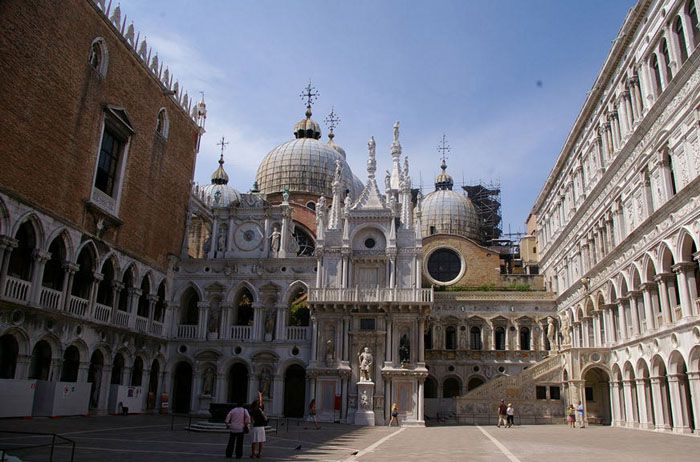 This junction used to connect Doges’ Palace with the prison. The prisoners suspired while crossing it heading towards another life in the “stone bag”. So, get it right, the Bridge of Sighs is not the place of romantic sighs under the moonlight! 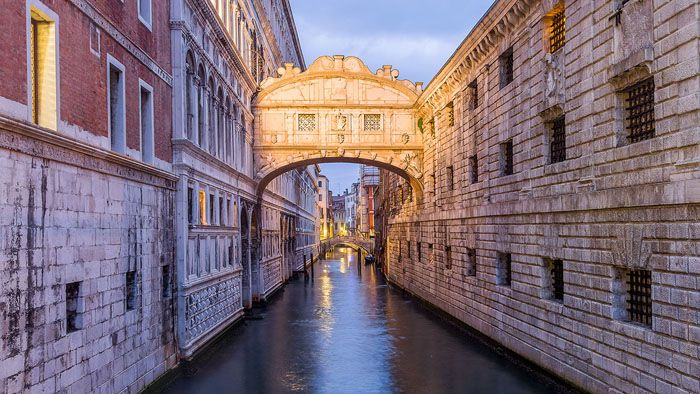 It was built in the estuary of the Grand Canal in honor to ridding the city of the plague. According to the legend it was the Virgin Mary who saved the citizens of Venice from plague. The church of “Salute” (which can be interpreted as “salvation” or “health”) was built in the middle of 17th century and it’s still considered to be one of the most beautiful churches in the country. 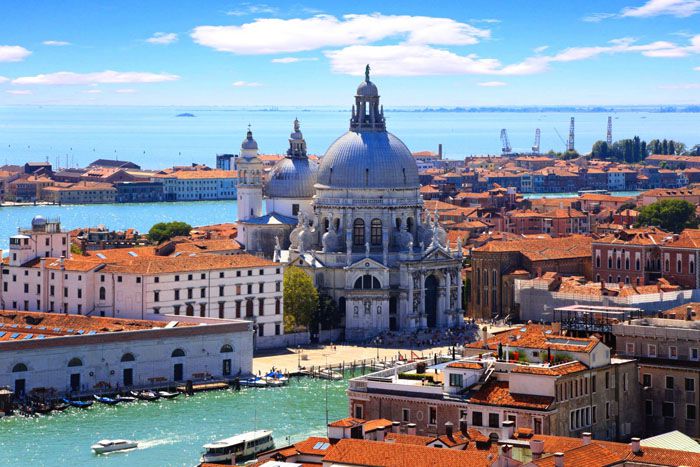 The cathedral was built in the Gothic style by the members of the Franciscan Order in the 15th century. Frari is the shorten name of the church among locals. It’s a beloved religious destination in the city among its citizens. Inside the church there are a lot of paintings by famous artists of 16–18th centuries. 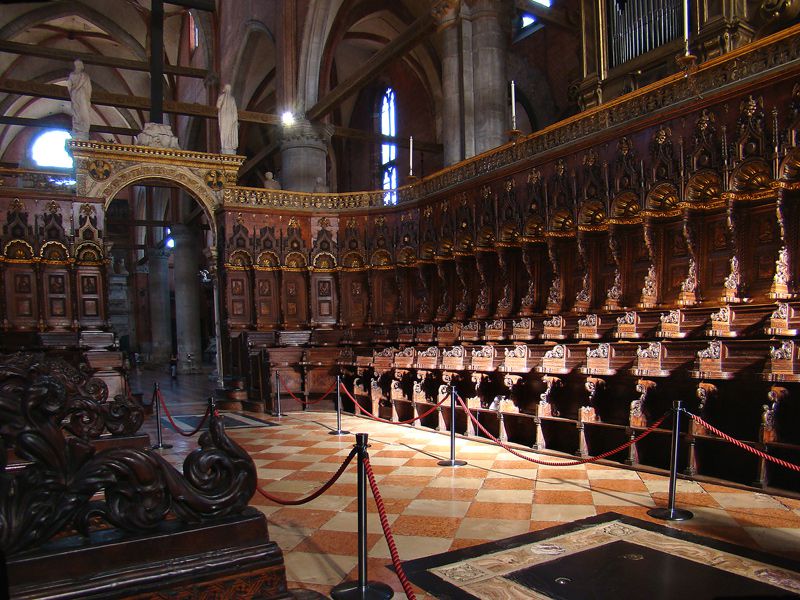 The Dominican temple of St. Mary of the Rosary dated by the 18th century stands on 270 stilts and is decorated by beautiful statues, frescoes and gorgeous interior finish. 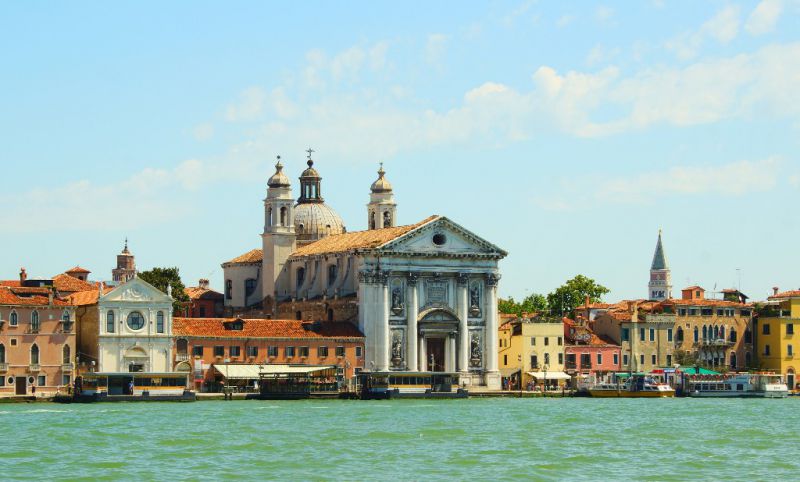 Ex-monastery and a part of church has housed 25 halls, filled with the paintings of famous Venetian masters. Gallerie dell'Accademia is an oasis of Venice art. 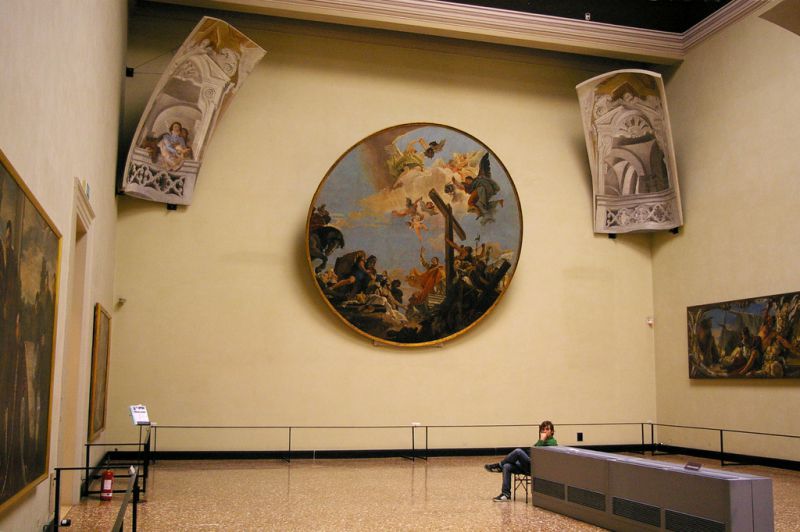 Photo by: flickr.com, by Bob Gellatly.

The Island of San Giorgio Maggiore

The island and the church of the same name are the places where several works of the famous painter Jacopo Robusti (Tintoretto) are kept. Among one of the most famous is the famous “Lord's Supper”. The island is also famous for fantastic sceneries of the city. The best panoramic views open from the top of the bell tower of the church. 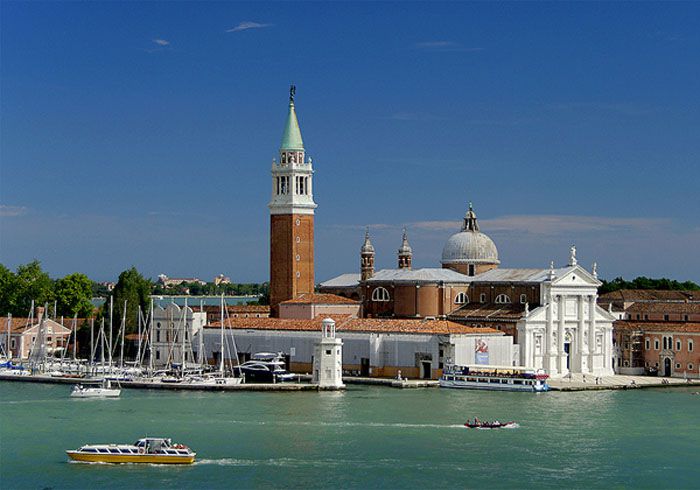 Being the centre of Venice lagoon this island is a place where unique glass goods are made. These air weightless glass products can become an essential part of any interior. This time, the pupils of the masters who brought world the fame to this island work here. 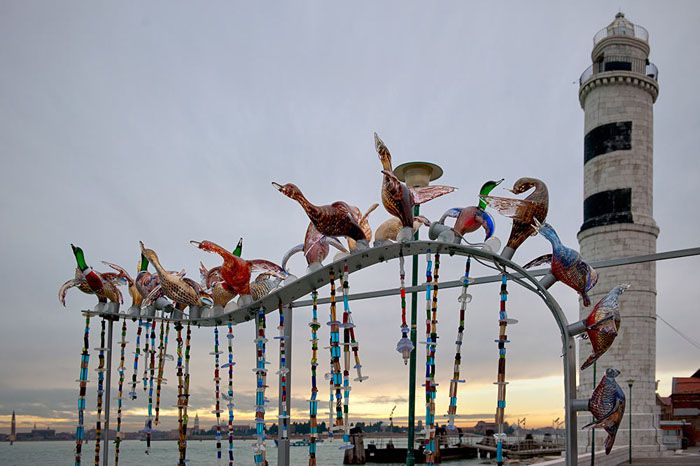 The Island of Lido di Venezia

It is the motherland of the famous film festival. The island is famous both for the streets bearing the names of world famous actors and actresses and for its wonderful beaches. By visiting it one can enjoy the warmth of light waters of Adriatic sea, the beauty of narrow green streets and the atmosphere of an old Italian town which is so rare in popular touristic cities. 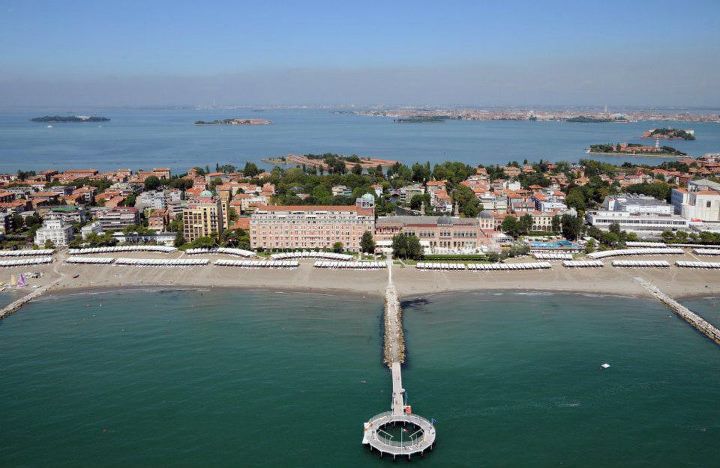 In past times the island was popular among those who was looking for famous Venice laces. Nowadays nothing but a museum and souvenirs made according to the old pictures and schemes left from the past treasure. But what remained untouched are bright colorful houses of fishermen (which according to the legend served as a way marks for them while coming back from the sea). This architectural feature still attracts lots of tourists, photographers and people of art. 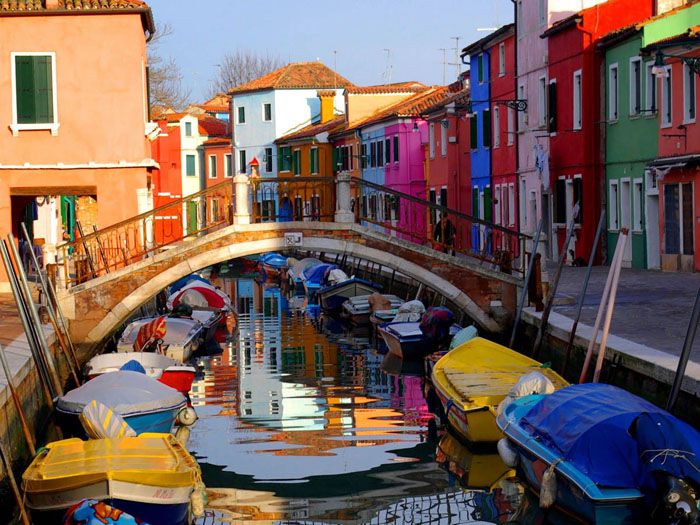 One can write about interesting places in Venice endless... Narrow footpaths between the network of water arteries, sunsets above the canals, quiet songs of gondoliers, the shadows of water trams, huge palaces with the footprints of the past, sassy but lovely doves, graceful temples, fine bridges and beautiful sculptures – all of them create the atmosphere of quietness and romance. This is why millions and more people tend to see this “wonder on a water” – tranquil Venice.

26 most interesting attractions in Italy