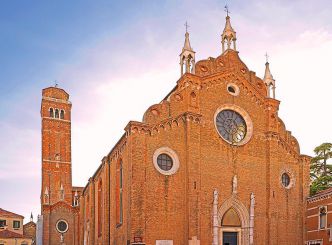 A unique religious landmark can be found standing in the very heart of Venice – it is called the Basilica of Santa Maria Gloriosa dei Frari and was built by Franciscans in the 15th century. Today the temple is located in the San Polo area on the square of the same name. The building is also often called simply the Frari.

History of the Frari

In the far 12th century, a religious movement emerged in Umbria that altered the future of the entire country. Francis of Assisi, the founder of the new doctrine, preached life in poverty and simplicity. His followers received a piece of land for construction in 1231. This is how a church and a monastery of Santa Maria Gloriosa dei Frari appeared.

The second structure just like the first one was too small to accommodate an increasing number of parishioners. The third one, the last version of the church appeared by 1443. In 1492, the basilica was consecrated in honor of the Assumption of the Virgin. Restoration of the old Gothic church was carried out in the early 20th century.

The gothic style of the church and its bell tower is quite characteristic of the Italian religious medieval architecture. The interior decoration is not luxurious because the basilica used to belong to the Franciscan Order. However, you can find many paintings and sculptures depicting saints in here.

The former monastery Ca' Granda dei Frari is located to the right of the church. It existed for more than 6 centuries. It is known for its size since has more than 300 rooms. Two of his apprentices became Roman popes – Sixtus IV and Sixtus V. From 1810 the monastery had served as the barracks, later it became the state archive. Nowadays, Ca' Granda dei Frari is considered to be the largest historical archive in the world.

Cloister of the Holy Trinity

The gallery called the Cloister of the Holy Trinity can be found near the monastery. It was designed by architect Andrea Palladio. The building contains many sculptures of the Holy Trinity. In the middle of the gallery, there is the well of Giovanni Trognon. During the drought in 1792, the well did not dry up, and everyone was allowed to use it.

The bell tower of the basilica is 70 meters high. It was built by architects Jacopo and Pietro Paolo Delle Masegne in 1396. The observation deck of the bell tower offers a picturesque view of Venice.

To reach the Basilica of Santa Maria Gloriosa dei Frari, take a vaporetto to the San Toma stop.