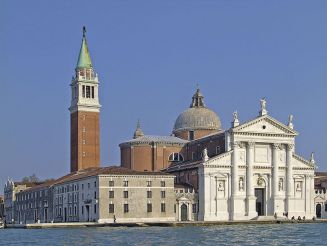 A church called San Giorgio Maggiore and built between 1566 and 1610 stands tall on a picturesque island of the same name. The architect Andrea Palladio was put in charge of the construction and completed by his apprentice Vincenzo Scamozzi after master’s death.

The basilica is designed in the Renaissance style. There are six chapels in its three naves. Also, two chapels can be found in the transept. The main altar is decorated with the figure of Christ placed on a ball which is supported by evangelists. The statue was created by the Italian sculptor Girolamo Campagna. The bell tower of the cathedral which is a brick square tower was built in 1791.

Pope Pius VII was crowned in the Church of Saints George and Stephen in 1800. Later, in 1808, the cathedral and monastery were closed by order of Napoleon. After that, the buildings served as barracks and lost its original appearance. In 1951, Count Vittorio Cini acquired the place and organized a thorough restoration.

The interior of San Giorgio Maggiore will not let you take your eyes off of it. The impressive columns and pilasters among the huge white walls are simply amazing.

Paintings such as "The Last Supper", "The Miracle of Manna" and "Risen Christ with St.Andrew and members of Morosini family" by Jacopo Tintoretto are put on display inside. Also, there is a monument of 1640 dedicated to Doge Domenico Michele.

To the left of the main altar, you can go up to the top of the bell tower which offers a breathtaking view of the Giudecca Canal and Lagoon.

You can get to the island of San Giorgio Maggiore and the church itself by vaporetto № 2.