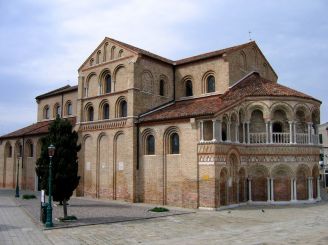 The Venetian-Byzantine Church of Santa Maria e San Donato founded in the 12th century is located on the main square of Murano Island in Venice. Initially, a cathedral consecrated in honor of the Blessed Virgin Mary was standing right where the church can be found now. That construction didn’t survive till this day, and a new religious building was erected instead which received a second name – the one in honor of the Bishop Saint Donatus of Arezzo. The remains of the bishop that lived during the 4th century were brought from Kefalonia in 1125. Since then, the basilica has had a double name. It is also often called Duomo di Murano.

The Church of Santa Maria e San Donato is the prime example of the medieval religious architecture and is one of the oldest buildings in the Venetian Lagoon. The cathedral itself and its bell tower are built of red unlined brick.

One of the most interesting pieces in the church is the colorful mosaic floor of the 12th century which attracts a lot of tourist attention.

The Duomo di Murano keeps the remains of Saint Donatus. Behind the altar, there are four rib bones of a very considerable size. Legend has it that they belong to the dragon who was killed by Saint Donatus. Modern scientists believe that these are the remains of an extinct mammal that lived during the Pleistocene.

The cathedral can be reached by vaporetto, you need to get off at the stop Murano Museo.