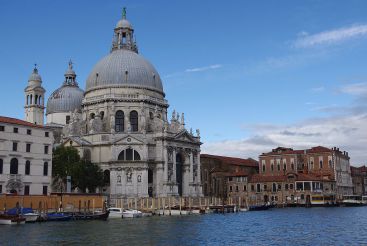 Santa Maria della Salute in Venice was built in the 17th century in gratitude to the Virgin Mary for ridding the citizens of the plague. The years 1630–1631 were fatal for medieval Venetians. The terrible plague claimed the lives of about a third of the population. In 1631, after the Doge Nicolo Contarini approved the construction, the architect Baldassare Longhena started working on the building. The construction lasted for more than half a century, the basilica was consecrated after the death of its creator. Later, a seminary building was added where future Catholic priests still can get their education.

To this day the Mass is celebrated annually as a token of deliverance from the plague in the cathedral. This takes place on the day of the Entry of the Most Holy Theotokos into the Temple during the festival called the Festa della Salute.

The place is built in the shape of an octahedron which is crowned with a round dome. There is also a statue of the Virgin Mary installed on the top of the 60-meter dome. Later on, a second, relatively small dome was added.

Entrance to the cathedral looks like a triumphal arch. A wide staircase leads to it directly from the pier. The facade is decorated with sculptures of the Virgin Mary, John the Forerunner and the Archangel Michael. Marble statues related to the plague can be seen on the central altar.

The six basilica chapels are decorated with rare sculptures and paintings. The floors are covered with marble patterns. Overall, the interior of the temple is known for its elegance.

The main treasure of the basilica is the Byzantine image of the Madonna della Salute brought here from the Crete island in the late 17th century. Legend has it that the author of the icon is none other than Saint Luke.

In addition, the canvases made by legendary masters are exhibited in the cathedral as well:

The cathedral had a special foundation designed for it. Considering typical for Venice the humidity, it was necessary to ensure the stability of the structure. To achieve that the workers installed about 100 thousand wooden piles. A very laborious and expensive process was a success.

The cathedral is located on the Grand Canal, in the Dorsoduro area. From here, you can travel on the water bus number 1 called Vaporetto to the central station.

Admission: free at all times for those who wish to visit the basilica’s central rotunda; a small rotunda and a chapel can be closed during church events.