The Basilica of Saints John and Paul, Venice 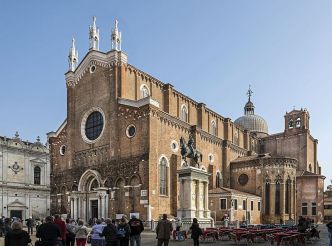 The Basilica of Saints John and Paul is one of the most famous cathedrals in Venice. It is also known as San Zanipolo. This name originated from the specific dialect of the Venetians. The basilica is located on Piazza dei Santi Giovanni e Paolo, in the Castello district. Once you come to Venice, it will be impossible to resist checking out the landmark. It is also quite difficult to find a more complete collection of medieval paintings and sculptures stored in one place.

History of the Basilica of Saints John and Paul

The cathedral building which we can see today was built in 1430. It was dedicated to the martyrs John and Paul. People often assume the name refers to the apostles John and Paul and mistakenly so. In reality, this is about the early Christian martyrs named John and Paul who were executed in Rome in 362.

Legend about the church’s creation

Soon the church became of a great importance, many dogi chose it as their burial place. The cathedral needed to be expanded. The construction was carried out with the help of donations. The final restoration was completed in 1355. From the early 15th century, the basilica was rapidly becoming richer and more decorated. Its consecration took place in November 1430.

In 1806 Dominicans were expelled from the monastery by order of Napoleon, the place became a military hospital. During those times the Basilica of Saints John and Paul lost many artworks. In 1810, the monks started restoring the church again.

The last reconstruction took place in the early 20th century. During the First World War, this religious building suffered from the Austrian bombing, but fortunately, insignificantly.

The majestic church is impossible to miss, especially considering its Gothic style typical of medieval Italy. It is also difficult to look away from its interior richness. A large number of artworks stored inside always attracts many tourists.

The facade is made of red brick. It is divided into three parts by vertical pilasters. In the lower part, there are niches with sarcophagi. The central portal which was built in 1458–1462 is decorated with marble columns. At the top, the façade crowns the gable with the statues of Dominican saints - Thomas Aquinas, Dominic, Peter of Verona.

The Scuola Grande di San Marco is the closest to the place. An apse with the Chapel of Blessed Giacomo Salomoni is located to its right, the Chapel of Our Lady of the Rosary can be found next to it.

A series of apses ends with the Chapel of St. Dominic. Here visitors can find the priceless masterpiece created by Giovanni Battista Piazzetta in 1727 and called “The Glory of Saint Dominic.”

The apse on the east side of the cathedral has Gothic windows.

Chapel of Our Lady of the Rosary

You should definitely see the Chapel of Our Lady of the Rosary which is situated in the northern part. The ceiling inside is decorated with three masterpieces by Paolo Veronese – the Adoration of the Shepherds, Annunciation, and Assumption.

Doji as well as many prominent figures of past times, such as the artist Giovanni Bellini, Admiral Vettor Pisani rest inside the cathedral (only 18 leaders of the Venetian Republic are buried in here). The most luxurious is considered to be the mausoleum of the Valiero family, several representatives of which were doji.

The closest ferry pier to the Basilica of Saints John and Paul is called Ospedale.