The Carnival of Venice

The Carnival of Venice is one of the major winter festivities in Europe. It annually attracts hundreds of thousands of visitors. This celebration takes place before Lent. And at the same time it represents the memory of the unparalleled and the most colorful, fun and surprising victory over the social (and any other!) stereotypes in medieval Europe. 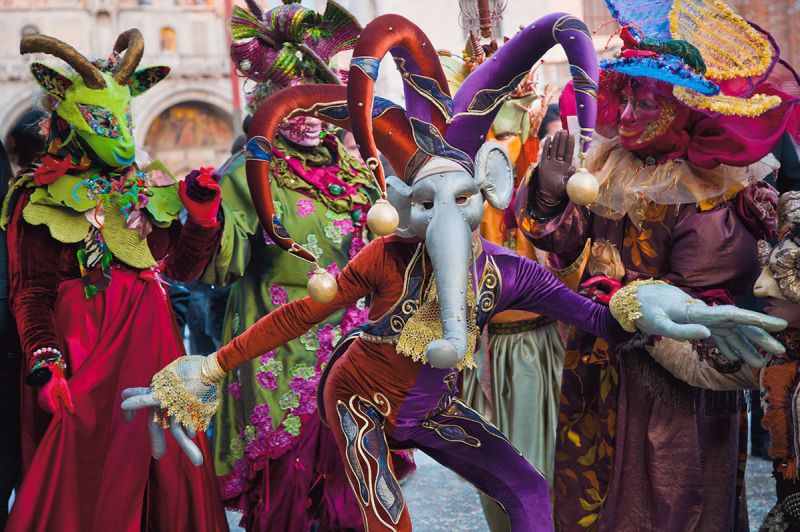 The Carnival is sometimes mistakenly regarded as "a celebration of the common people." From the beginning it was considered as a representation of equality and openness, rejection of rules and conventions. The Carnival also held some danger in it. No wonder that mysterious love stories, as well as the bloody Italian detective stories, were often hidden under the elegant carnival masks... Carnival celebrations in Italy were popular not only in Venice. Sicily and Sardinia, Emilia Romagna, Apulia, Marche, Basilicata, Lazio and Piedmont are also known for their parades, festivities and balls.

The History of the Carnival

There was a time when the Venice Carnival used to begin on the second day of Christmas (December 26). The Carnival lasted until last Tuesday before Lent, which starts on Ash Wednesday. This day is sometimes called "Shrove Tuesday" (or Mardi Gras). There are other versions of carnival history. For example, some historians and contemporaries of Baroque epoch state that the festivities actually did not end at all. But there were breaks during lent and harvest. In October, the carnival fun started all over again!

The origin of the modern carnival has several historical sources. On the one hand it is connected with the Roman pagan winter celebrations, dedicated to the god Saturn (Saturnalia) and celebrations of harvest. The further development of the Venetian culture and Christianisation made people perceive this fun festivities as a entertainment before Lent. That is how the word "Carnival", which literally means "farewell to meat" (carne-vale) was created. 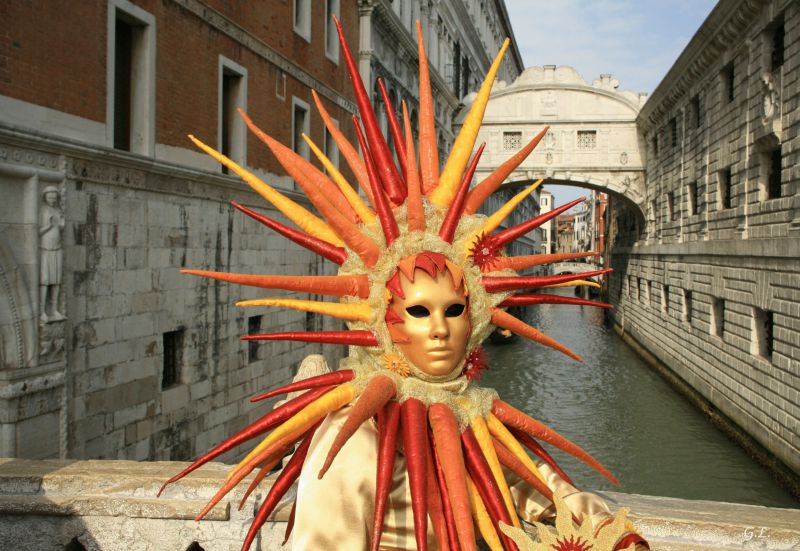 The first recorded celebration of the Carnival of Venice was documented in 1094. Since then, for centuries the carnival remained the most striking phenomenon of the Venetian culture. In the 19th century the carnival conquered the whole world. A fun masquerade became "trade mark" of Venice and you could hear different languages ​​and dialects being spoken at the festivity. The carnival characters were widely used in art, literature, theater, cinema then and are still being used now.

In the 19th century the Venice Carnival survived an "oblivion era" of a kind. When the whole world started talking about the festival, Venice itself rejected it. But in 1980, the Venetian carnival tradition began to revive. However, since then, celebrations last much less – from a week to three. In recent years, the carnival in Venice lasts just over two weeks.

The Traditions of the Carnival of Venice

The Carnival was always accompanied by unrestrained joy and unjustified cruelty. In ancient Rome, the Saturnalia was a period when the social order was overturned and during this time slaves were equal to their masters. To emphasize this, in the 13th century the Venetians began to use carnival mask everywhere. Not so much to hide the face, but to allow free contacts with representatives of other social classes and circles. 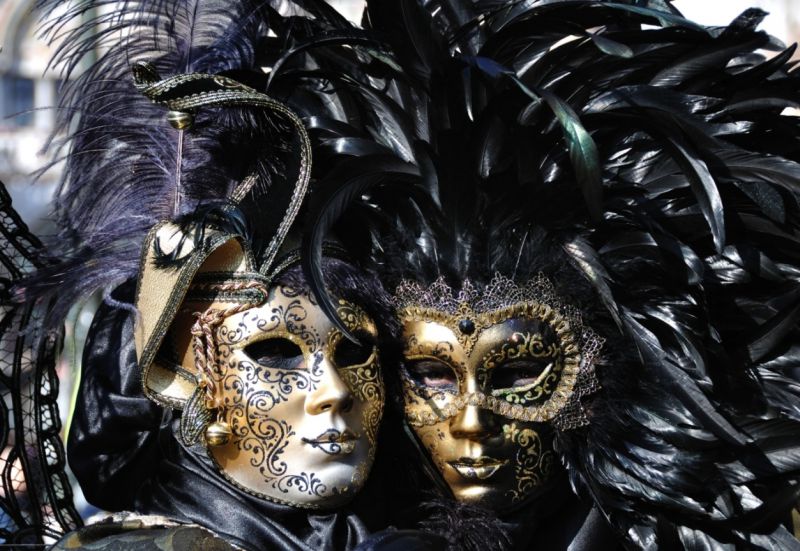 Hiding all the faces under masks, in one way or another, led to a variety of social consequences. Romantic and tragic, funny and criminal, forbidden and scandalous... During this period there were no rules. The carnival had created a lot of children and victims. Perhaps the festive traditions were the most frivolous in the days of the Republic of Venice.

Modern carnival is not as violent and rampant spectacle as it used to be. At the same time, it has combined a lot of the traditions and symbols of Venice. The action simultaneously takes place in many sights that are the attractions of Venice and are worth visiting. Ancient and modern variations of festivities are right now combined in one lively celebration. One of such events is an ancient Feast of Mary (Festa delle Marie). This is a reminder of the rescue of the Venetian girls who were once stolen by the pirates of Istria.

Nowadays, the Carnival of Venice is a feast of freedom, theater, music and street food. Many festivities are held at the same time, such as: Gondolas Parades on the Grand Canal, competitions of traditional clothes and masks, masquerade balls, historical reconstructions and Festa delle Marie (competition of twelve beauties of Venice). In the next year the winner of this feast becomes the main figure of the "Flight of the Angel." She flies over the crowd from the belfry of the San Marco Basilica in Venice right on to the main square. The end of the carnival is marked by another "flying" show – the "Winged Lion". It is a winged emblem of Venice and the symbol of the Christian patron saint, Mark the Evangelist.

Masks removed taboos and erased differences. That is why it was forbidden to wear them not in the carnival season. Traditional Venetian masks are often divided into two types. The first type are the masks of the Italian "Commedia dell'arte". They are the Harlequin and Columbine, Pulcinella and Pierrot, Pedrolino, Zanni, Brighella and other characters. 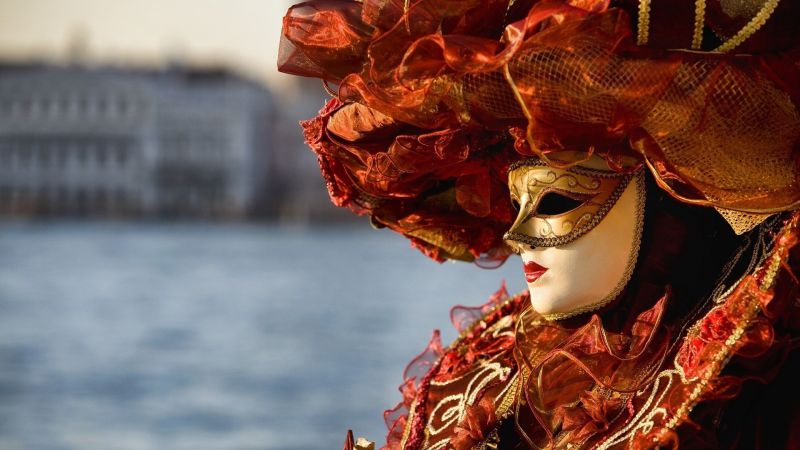 There are other masks that have appeared during the existence of carnival and they reflect the Venetian culture and tradition. They are: Bauta (the simplest and the most popular), Moretta (silent servant), Larva, Venice Queen, Joker, Cat, Doctor of the Plague (medico della peste) and Volto (neutral mask of  a citizen). Of course, apart from these, every year there are new masks and their number is endless.

Masks are made of special types of plaster, papier-mâché, paint, fabric, foil and other decorating materials. Ornamentation and coloring of the Venetian mask is a fiddly handicraft. Craftsmen use both: simple and highly valuable components, such as soil, gold tinsel, natural bird feathers and jewels.

Interesting Facts about the Carnival

Bellagio – the city of Christmas ornaments