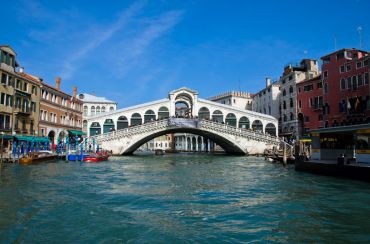 The Rialto Bridge was the first to be built over the Grand Canal and to span the main artery of Venice. It is an extremely popular landmark and is recognized as a symbol of the City of Water. Rialto is located at the narrowest point of the Grand Canal in the central part of Venice. It connects two urban neighborhoods: San Polo and San Marco.

The first bridge across the Grand Canal was erected in 1181 by the design of the master Nicolò Barattiero. It was seen as a pontoon propped up with floating structures and was named Ponte della Moneta, meaning "coin bridge". There are several versions of its nickname's origin. The first says that, according to historians, it was a toll bridge. As another theory has it, the landmark was located in the immediate vicinity of Zecca street, where a mint stood.

In the middle of the 13th century, the Rialto market on the east bank of the Grand Canal was actively developing. The pontoon couldn't cope with the flow of pedestrians. Therefore, a necessity to build a new wooden bridge appeared. It had a form of an arch and could be opened in the central part to let large vessels pass through. The new bridge was named after the Rialto market.

However, in 1310, it was badly damaged during a fire. The second misfortune overtook it in 1444 when a crowd of Venetians gathered there to look at the margrave Ferrara's fiancée. Unable to withstand the weight, the bridge collapsed into the waters of the Grand Canal.

In the 15th century, the construction was rebuilt again. It was the time when shops first appeared along the Rialto. Payment received from their rent was used to maintain and reconstruct the bridge. However, when in 1524 it crashed again, the authorities started seriously thinking of erecting a stone bridge across the canal.

Venetian doge Pasquale Cicogna launched a competition for the best project of the city bridge. It is noteworthy that the models were submitted by such famous architects as Michelangelo, Vignola, Andrea Palladio and others.

In 1551, the winner was announced. It was the little-known architect Antonio da Ponte, whose project was brought to life. The composition he proposed resembled the first wooden crossing over the Grand Canal. The construction was conducted from 1588 to 1591. It is this very design that has survived up to the present day.

It is worth noting that Rialto remained the only bridge through the Grand Canal until 1854 when the Academy Bridge was erected.

The reconstruction of the Rialto Bridge was carried out between 2012 and 2015.

Composition of the bridge

The Rialto Bridge is recognized as one of the most visited places in Venice as it offers a wonderful view of cosy houses and buildings as well as the landscape of the Grand Canal.

You can get there through the Piazza San Marco if you move in the direction of the Church of San Salvador or by water bus vaporetto (Stop: Rialto).