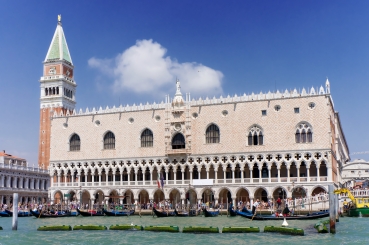 The Doge's Palace is located in the most extraordinary city of Italy – Venice. Since the Middle Ages the palace have served as the residence of the rulers of the Venetian Republic – the Doges. The palazzo is situated on St. Mark's Square. Today there is a museum in the palace and there is an entrance fee. In Italian: Palazzo Ducale.

History of the Doge’s Palace

The Senate, the Supreme Court, the Grand Council, the police and the Inquisition all sat in the Doge’s Palace. The current building is the fourth Doge’s Palace. For more than 10 centuries (till the 18th century) the title of the doge was born by the head of the Venetian Republic.

The first building, created on the ancient ruins in the form of a fortress, was destroyed at the end of the 10th century during a riot. The second palace burnt down in the 12th century during the fire, and the third was old, and not aesthetically beautiful, as it did not match the style and concept of the inhabitants of Venice about the greatness of the republic. Therefore, in the 14th century, the construction of a new palace, a masterpiece of European Gothic and Byzantine styles, was started.

This is exactly how the Doge’s Palace in Venice looks like today – the building looks like a medieval ship, its facades overlooking a small square located near St. Mark's Square and the Venetian harbor. In the courtyard you can get through several gates, the most famous of them – Paper. Here, orders were written and deals were concluded. Two floors are decorated in the form of open galleries. The walls of the upper floor are lined with pink marble. Events took place at the top of the Giants’ Stairs where coronations took place. The halls are decorated with paintings by famous masters of the Renaissance – Paolo Veronese and Tintoretto.

The most famous building of the Doge's Palace is the hall of the Grand Council. This is the largest room, with an area of ​​1350 square meters, with a ceiling without a single supporting. On the top of the walls portraits of all the Doges of Venice, who ruled the republic are exhibited one after another.

Everyone, except for the 55th Doge Marino Falier. In the middle of the 14th century, he attempted to carry out a coup d'etat in order to usurp power, but his actions were not supported by either the close people or the public. Doge was executed as a traitor, and the space that his portrait was supposed to occupy was covered with a dark veil, as a reminder of the inviolability of the republican principles of Venice.

Attractions of the Palazzo Ducale

While enjoying the architecture and decorations of the Doge's Palace and admiring the paintings and frescoes, the rich decoration of the halls, do not forget to pay attention to the main attractions of the building:

The Doges' Palace is located on San Marco Square, 1. The entrance to the palace is situated on the harbor side. To get to the Doge's Palace in Italy, you need to take a river trolley (vaporetto) and get off at St. Mark's Square. Nearest stations: San Zaccaria and Vallaresso.