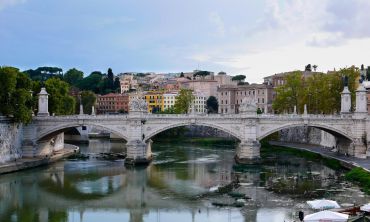 Ponte Vittorio Emanuele II is one of the most beautiful bridges in Rome, a historical monument, and also it is included in the list of masterpieces of the architectural creativity of the Eternal City. It crosses the Tiber River and connects the historical center of the city with the Vatican.

The bridge of Victor Emmanuel, also known as the Ponte Vittorio Emanuele II, received its name in honor of the first king of Italy. The construction of the bridge was led by the famous Italian architect Ennio de Rossi. The grand opening of the Ponte Vittorio Emanuele II took place in 1911 and was timed to coincide with the 50th anniversary of the unification of Italy.

The architectural composition of the Ponte Vittorio Emanuele II is a massive three-edged structure, which is divided by four columns. On both sides there are sculptures, each side of the bridge is guarded by bronze statues – symbols of the winged Victory with a military arsenal, as well as broken chains and a wreath of flowers. The central arch of the bridge is decorated with a group of sculptures, which are a symbol of freedom and unity. In addition, the bridge of Victor Emmanuel is richly decorated with relief details, as well as sculptures of fairy-tale characters.

The length of the bridge of Victor Emmanuel II in Rome reaches 108 m, and the width reaches 20 m.

Ponte Vittorio Emanuele II is a pedestrian bridge in the heart of Rome. It will not be very difficult to get here, since the object is located close to the main sights of the city. Such public transportation routes are laid to the bridge:

Next to the Ponte Vittorio Emanuele II there is another iconic landmark of Rome – Ponte Sant'Angelo.