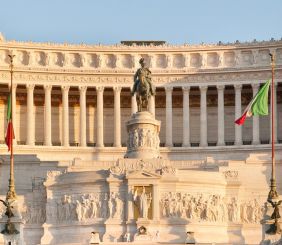 On the Capitoline Hill in the center of the Venetian Square in Rome there is a grand monument created in honor of the first king of the united Italy, Victor Emmanuel II. The construction took place between 1885 and 1911. In the complex near the Vittoriano (Altare della Patria) there are two museums – the Central Museum of Risorgimento and the Museum of the Flags of the Navy. Inside of the statue of the Goddess of Rome there are the remains of an unknown soldier, in memory of all the warriors of Italy, who have disappeared. Here, the eternal fire burns, which is guarded by the military guard. At the very top of the monument, there are chariots of the goddess of Victoria. Under the monument to the king there are twenty statues of people in different robes, symbolizing the regions that have become a single country.

According to the project of architect Giuseppe Sacconi the monument was created in the ancient Roman style. The whole composition is decorated with bas-reliefs, statues and columns. The scale of the monument is striking. In the 19th century it was one of the most ambitious projects. Only the bronze equestrian statue of the king reaches 12 meters in height.

To this day, Altare della Patria remains the largest structure, which is built of bottici marble. Because of the unusual shape, which clearly distinguishes the monument from other structures, the Romans call it "wedding cake", "typewriter", and even "false-jaw".