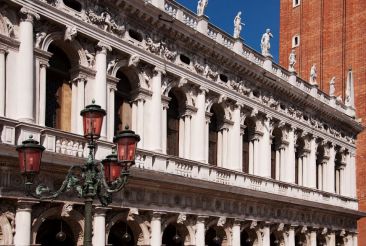 The National Archaeological Museum is one of the oldest not only in Venice but throughout Italy. It has a rare collection of Greek sculptures as old as the 6th-5th centuries BC, as well as bronze ware, ceramics, precious stones, coins and much more. The museum sits in the central part of the city, in St Mark's square. The National Archaeological Museum of Venice is an excellent choice for ancient art, history and numismatics lovers.

History of the Archaeology Museum

The largest Archaeological Museum in Italy was founded in 1523 by the Venetian Cardinal Domenico Grimani, who bequeathed the Republic his rich collection of antiques.

In 1812, by order of the Viceroy of Italy Eugene Beauharnais, the museum was transferred to the Doge's Palace. After the First World War, the institution moved to its current location on the first floor of the Procuratie Nuove. The building was a gift of King Victor Emmanuel III.

Artifacts that have been preserved since the era of Ancient Greece and Rome are the pearls of the collection in Venice. The most valuable among them are:

One of the halls contains an exposition devoted to the findings discovered in the late 19th century during the expedition to the Middle East. Among them are the fragments of the cuneiform script dating back to the reign of Nebuchadnezzar in the 5th-4th centuries BC.

The collection of coins deserves special attention. The age of the exhibits, which were found in Italy, Spain, Greece and North Africa, spans from the 5th century BC through the 17th century AD.

The National Archaeological Museum in Venice is easy to reach since it is located in the centre of the city, in St Mark's square. You can get there from any part of Venice following the Piazza San Marco signs on the facades of buildings. The nearest vaporetto stop is S. Zaccaria (Danieli) "F" and S. Marco (Giardinetti) DX.

It is recommended to purchase a single ticket for all the attractions of St Mark's Square. It will allow you to visit not only the museum but also the Doge's Palace, Museo Correr and the Monumental Hall of the National Library of St Mark.