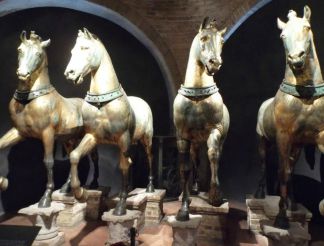 The museum was created to exhibit items related to the history of the most significant temple in Venice – St Mark's Cathedral. St Mark's museum is located inside the temple, in the historic part of the city. Its collection is made up of unique mosaics, tapestries, masterpieces of painting, icons etc.

Museo di San Marco was opened in the late 19th century on the initiative of Pietro Saccardo. Due to new collections arrivals, the administration was forced to seek new locations over and over again. In 2003, the museum occupied several cathedral halls which lead to the banquet hall of the Doge's Palace.

The exposition devoted to the history of the cathedral's mosaics contains fragments as old as the 11-12th centuries. The "Myrrhbearers" and "The Massacre of the Innocents" deserve special attention.

The second hall of the St Mark's Museum hosts a collection of precious stones, icons, as well as ancient church chants. The pearls of the exposition are woollen tapestries depicting the cycle of the Passion of Christ.

Among the highlights, there is also the altar made by Paolo Veneziano in the Byzantine technique of icon painting. It was completed in the middle of the 14th century by the order of Andrea Dandolo.

Museo di San Marco sits in the central square of Venice in the cathedral bearing the same name. It is possible to get there from any part of Venice. Follow directional signs to Piazza San Marco on facades of buildings. Or take a water bus – vaporetto. Stop: S. Marco (Giardinetti) DX, ferries 2 and 10.