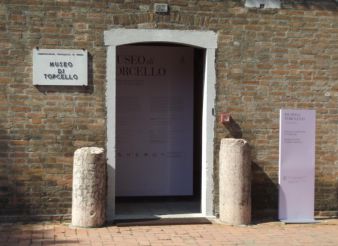 The Torcello Museum that was opened at the end of the 19th century sits on the island of the same name. Its collection is divided into two thematic exhibitions: archaeology; history of the Middle Ages and Modern Times. The museum is one of the historical monuments of the island.

History of the Torcello Museum

In 1870, the prefect of Venice, Luigi Torelli, bought Palazzo del Concilio. The palace houses a collection of archaeological artefacts that were found on Torcello, adjoining islands, and on the mainland. The opening of the museum happened in 1872.

In 1887, the researcher Cesare Levi brought some new artefacts from Rome. The same year, the museum moved to a new building, as the exposition steadily grew larger.

Between 1928 and 1930, a complete inventory of the exhibits was held at the Torcello Museum. It was then, for the first time in the history of the institution, that the researchers released a printed catalogue of artefacts.

In 1947, the archaeological museum was restored again. After a large-scale analysis of the existing exhibition, a new one, dedicated to the Middle Ages and Modern Times, was open.

The last reconstruction of the archaeological part was carried out in 1990.

In the period from 2005 to 2006, the Torcello Museum was equipped with a state-of-art security system.

Visitors are welcome to see a lot of items dedicated to the history of the Venetian lagoon, archaeology, as well as crafts of the first inhabitants of the region. All exhibits were either found by the museum staff or bought and donated by collectors.

The archaeological division includes artefacts, dating from the Palaeolithic era to the late Roman period, found in the lagoon of the Mediterranean Sea and other regions of the mainland.

The medieval and modern displays showcase objects and documents dating from the beginning of our era until the 19th century. The exhibits help tourists to explore the history of Torcello, Byzantine culture and the city of Venice.

The only possible way to get to the island is by vaporetto that runs the "T" route through the islands of Murano and Burano. Torcello is situated in the immediate vicinity of Burano, 5 minutes by water bus.