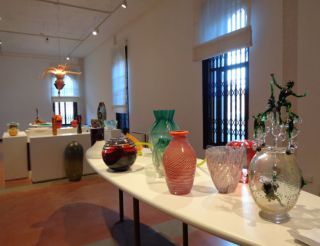 The Glass Museum on the island of Murano is one of the most interesting museums in Venice. The exposition is dedicated to the history of the emergence and development of glass-blowing craftsmanship – a unique craft of the Venetian region. It is located on the island of Murano, north of Venice. Inside the walls of the institution you can not only get acquainted with the process of making famous Murano glass, but also purchase unusual souvenirs, gifts and real art objects – lamps, vases and panels.

History of the Murano Glass Museum

The Venetian Glass Museum operates in the historical building of the island – Palazzo Giustinian. For many years, the palace was the residence of the Bishops of Torcello, and it was built in a Gothic architectural style and originally served as the residence of local aristocrats. However, in 1659, Bishop Marco Giustiniani bought the palace and donated it to the Diocese of Torcello. As a token of gratitude for such a generous gift, the palace received the name of the bishop, Palazzo Giustinian.

In 1805, the Palazzo became the property of the Patriarchate of Venice, and in 1848 it was at the mercy of the municipality of Murano. In the 18th century, Murano City Hall worked inside the walls of the palace.

The Murano Glass Museum in Palazzo Giustinian was opened only in 1861. Initially, the exposition was located only in the walls of one of the rooms of the palace, however the number of exhibits increased steadily, and gradually the museum occupied the entire building. In 1923, when the island of Murano became part of Venice, the museum became an integral part of the Association of City Museums of the city.

Glass-blowing skill in Venice arose long before the opening of the museum. In 1291, the authorities ordered to move all the shops from the city to the island of Murano. The skills were improved from year to year, the craftsmen managed to create ever more delicate products, and the technologies began to include the manufacture of several types of glass:

Even today, artisans continue to religiously follow the old methods. The collection of the glass museum on the island of Murano contains exhibits on the history of glass making, as well as interesting thematic finds – from Egyptian times to our days.

Also in the exposition you can see the best examples of glass production, including Renaissance decorations and a collection of archaeological finds from the necropolises of Enona.

The glass museum is located on the island of Murano, you can get there by vaporetto – municipal motor ship № 41, 42, 51 and 52, which follows from S.Zaccaria stations, near San Marco square or from the railway station. On the island you should get off the vaporetto stop – the "Museum".

The museum is closed on 25 December, 1 January and 1 May.