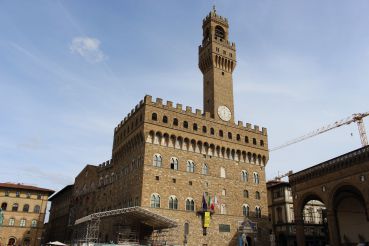 The Palazzo Vecchio in Florence is one of the most memorable sights of the city. The palace was built in the 13th century. Historically the place used to house the city authorities, today, however, the palazzo is considered to be a museum that possesses a lot of exhibits. The Arnolfo Tower crowns the top of the former town hall which, incidentally, often serves as a landmark in the city, because it is one of the tallest buildings in Florence. The Palazzo was built in the center, on Piazza della Signoria.

The Palazzo Vecchio in numbers and facts

History of the Palazzo Vecchio

The beginning of the construction of the Palazzo Vecchio in Florence dates to 1299. Back then the citizens decided to build a government residence that would be well fortified and protected from possible manifestations of aggression. The architect Arnolfo di Cambio was put in charge of the project. Today the tower of the Town Hall carries his name. 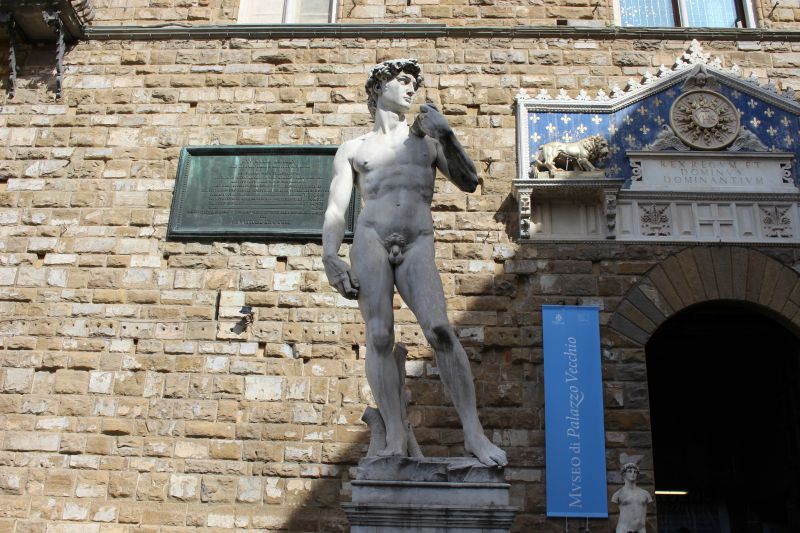 In the 15th century, a new form of political regime – signoria – was declared in the territory of Florence. Virtually all power was in the hands of the signora. Since then the palace had been called the Palazzo della Signoria, hence the name of the square.

Cosimo ordered to move the administration to Uffizi, and Giorgio Vasari to build an overpass from the Palazzo Vecchio through Uffizi and the Ponte Vecchio to the the Palazzo Pitti. Today this passage is called the Vasari Corridor. Part of the corridor is available for tourists, a guide for the tour through will be required.

Exhibits and rooms of the Palazzo Vecchio

Be sure to go inside the Vecchio Palace! The interior should definitely impress you. From the luxurious courtyards and interesting exhibits in the rooms where the original interiors have been partially preserved or recreated, to the stunning view of the entire Florence from the Arnolfo Tower.

Here are the most remarkable halls and sights of Palazzo Vecchio: 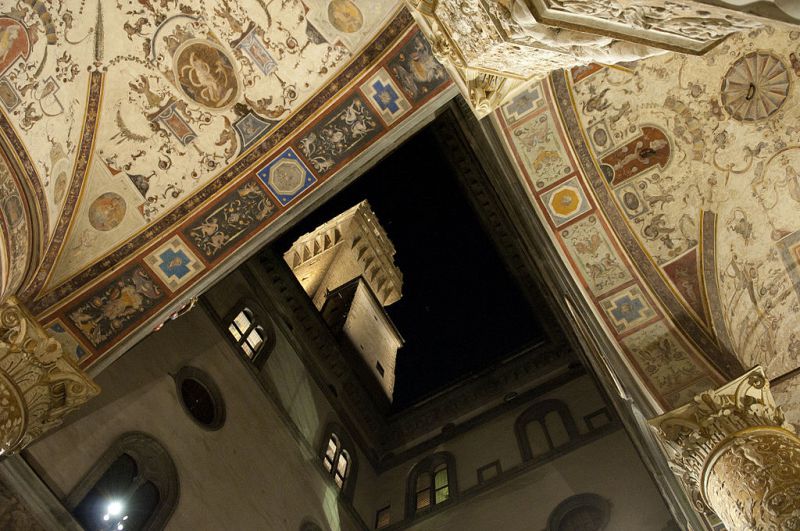 The interesting places of Palazzo Vecchio listed here are not the only ones. Even though some of the rooms are closed for visiting, the palace really has something to offer, especially to lovers of history, architecture and antiquity.

It's easier to say how to get there by foot, because the Palazzo Vecchio is located in the pedestrian center of Florence. If you need public transport anyway, look for the Galleria Degli Uffizi stop which you can reach by the bus C1. On the other side of the museum, there is the Condotta stop, the bus C2 includes it into its route.

The museum (the main rooms of the palace) and the archaeological site welcome visitors:

The Quartiere del Mezzanino and Loeser Bequest: every day, except Thursday, from 09:00 to 19:00; on Thursdays and holidays until 14:00.

The Arnolfo Tower and its terraces:

Everything is closed during Christmas.

Admission: ranges from 4 to 18 euros, depending on the ticket type and discounts. Ticket that costs 18 euro allows to enter all tourist areas of the palazzo. In the summer, you can purchase a night tour to the observation deck (4 euros).