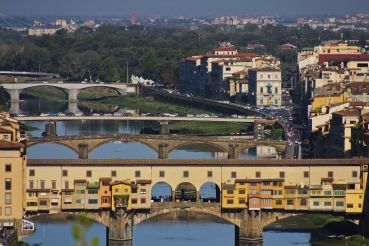 The Ponte Vecchio in Florence was built in the narrowest place of the Tuscan river Arno. It is not only the oldest bridge of the city but also an architectural monument that has survived to this day almost in its original form. The Vecchio Bridge stands close to another iconic landmark of Florence, the Uffizi Gallery. A rich history and unusual architectural composition attract tourists from all over the world.

History of the Ponte Vecchio

The first bridge in the place of the modern Ponte Vecchio was built in the time of the Roman Empire. The construction based itself on stone piles and had wooden superstructures. In 1117, significant flood damage was inflicted on Florence. As a result, the old bridge was ruined. The restored version was made entirely from stone. Although it soon yielded to the elements again. In 1333, the flood destroyed everything except for few central piles.

Vecchio, as we know it today, was built in 1345. The project was elaborated by the Italian architect Neri di Fioravante. The structure consisted of three arches. The central one had a length of 30 metres, and the other two were 27 metres long.

In the 15th century, all the butcher shops in Florence moved to the Ponte Vecchio, thereby turning it into a real meat supermarket. However, the bridge didn't have enough room for all vendors in the city. So stalls started to be installed over the water on both sides of the bridge.

In the 16th century, butchers were replaced by jewellers that sold gold accessories. At the beginning of the 17th century, the Vecchio bridge received its second name "The Golden Bridge", which is still used nowadays. The composition of the bridge was complemented by two panoramic platforms, which offered a view of the Arno river.

During the Second World War, Ponte Vecchio was under threat. Retreating, the German army destroyed all important bridges in Florence, except for this one. There are several versions of why the Germans left it untouched:

Today, there are ten bridges in Florence. Nine of them have undergone various alterations and have been reconstructed multiple times. The Ponte Vecchio is unique because it is the only bridge that was preserved in its original form. 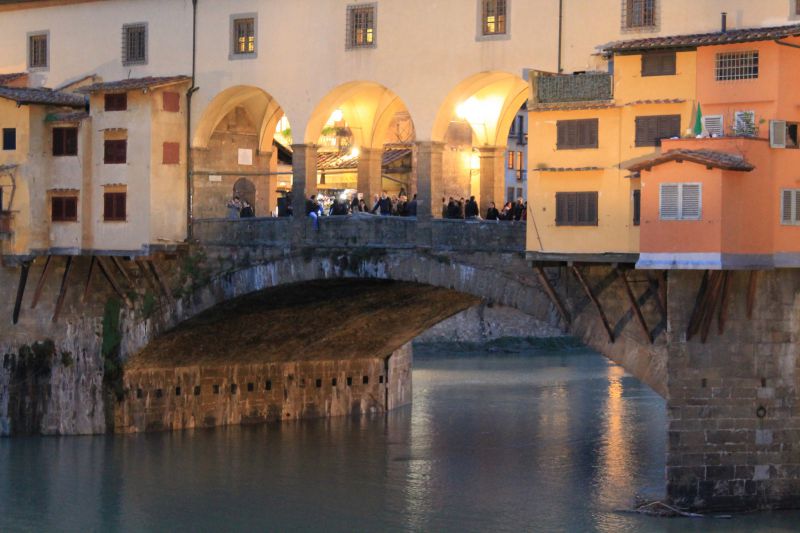 The Vasari Corridor is an unusual construction that makes a part of the architectural composition of the Ponte Vecchio. It was built by the architect Giorgio Vasari in 1565. The order was commissioned by Cosimo, the Duke of Florence, so that the nobleman could move from the Pitti Palace, in which he lived, to the Palazzo Vecchio, in which business meetings were held. Also, through special windows, he could observe the situation in the city and listen to conversations of traders and commoners.

The walls in the Vasari Corridor are adorned with canvases by Roman and Neapolitan artists and the richest collection of self-portraits of famous Italian masters: Raphael, Rubens, Velasquez, Kustodiev, among others. Currently, the collection comprises more than 700 paintings of the 16-17th centuries. The Vasari Corridor is recognized as one of the best art galleries in the world.