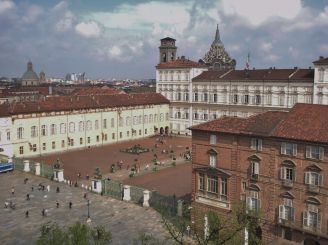 The Savoy Gallery in Turin (or the Sabauda Gallery – in the Italian Galleria Sabauda) is relatively small art gallery in the city center. Its peculiarity is that the core of the collection is made up of items from the personal collection of the monarchs of the ruling house of Savoy. Here you can find old interesting works of art created by the hands of many famous masters. The gallery is a part of the Royal Museums of Turin.

History of the gallery

The starting point of the Sabauda Gallery is hidden in the distant 1497, when the royal family began to collect works of art. Their first systematization took place in 1631, when the items of the monarch's collection were properly arranged. The gallery itself was opened on October 2, 1832, when the King of Sardinia, Charles Albert, gave away 365 paintings from his collection. Initially, it was located on the main floor of the Palazzo Madama, but in 1860 this room was occupied by the Senate. In 1865 the gallery together with the Egyptian museum found refuge on the second floor of the building of the Academy of Sciences. In 1923, the exhibition was expanded to 625 exhibits thanks to the donation of many items by the industrialist Riccardo Gualino. At the same time, the entire collection was cataloged.

During the period 1952-1959, a significant restructuring of the collection was carried out, and after 1970 another one. In 2012, for museum needs the restoration of some premises of the Royal Palace was started. And in December 2014 the gallery was moved to the new wing of the palazzo, "Manica Nuova", where it is today.

Sabauda Gallery now has approximately 500 works by famous artists from different schools from the 14th to 20th centuries. All of them are placed on 4 floors of the building in chronological order. Characteristic is that the paintings belong to the brush of the predominantly northern Italy masters. The collection also has canvases of Dutch, Flemish schools and some other European authors. Among the most famous works are Gaudenzio Ferrari, Gentileschi, Guido Reni, Guercino, Jan van Eyck, Rubens, Rembrandt. This collection is a real paradise for connoisseurs of art.

In addition to the paintings of the Sabauda Gallery, the collection also has sculptures. There are few of them, and they are randomly selected objects. The most famous is the silver bust of the Roman emperor Lucius Verus, found in 1928 near the town of Marengo in Piedmont.

The Sabauda Gallery in Turin is located in the heart of the city, not far from the Piazza Castello, on Via XX Settembre, 86. Directly in front of it, there is the excavation zone of the Roman Theater, and in some hundred meters – the Diocesan Museum. Near the museum there is a public transport stop Duomo/Musei Reali. Trams № 4, 7, and buses № 11, 19, 27, 51, 57, 92, N04 go to it.

Admission: the cost of a full ticket is 12 euros, with a discount (students of EU countries from 18 to 25) – 6 euros. For those under the age of 18 – admission is free. Also there is free admission on every first Sunday of the month. Data of May 2018.